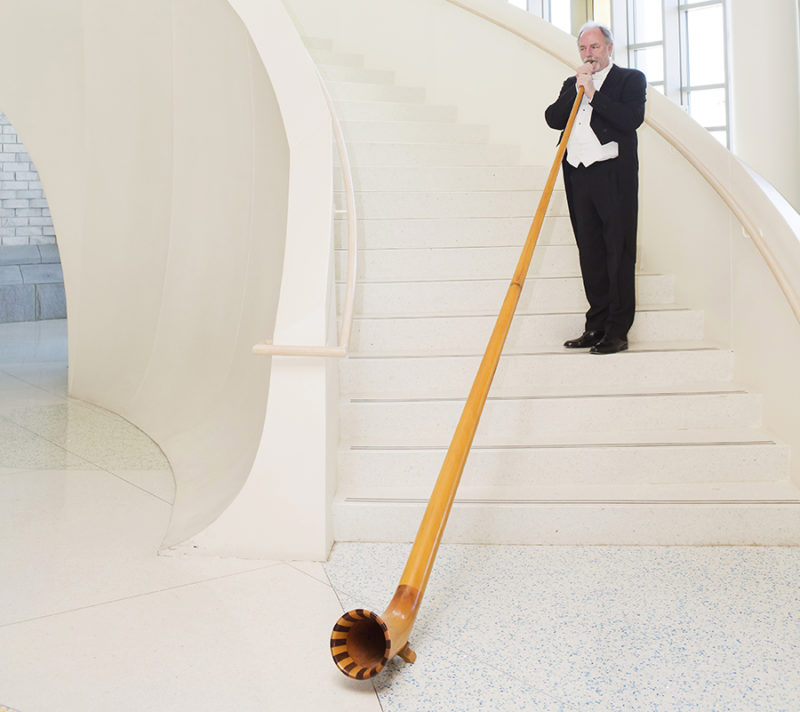 TV watchers of a certain age will remember the long-running ads for Ricola throat lozenges, featuring a signature call – “Re-co-la!” – played on the Alphorn (or Alpenhorn), a historic wooden horn instrument born in the Swiss Alps.

That could have been Francis Marion University’s Dr. Terry Roberts playing that tune.

Well, actually it couldn’t – more on that later – but Roberts is a trained Alphornist. He’s played it for years, often for money; has written music of it; and actually owns one of the behemoths. (Most Alphorns range from 8 to 15 feet, with instrument pitch depending upon size. An American carver made a 154-foot long Alphorn several years ago. It’s believed to be the world’s largest.)

“It’s just something interesting to do on the side,” says Roberts.

Roberts, who directs the Music Industry program at FMU, is a virtuoso French Horn player, who has played that instrument in a variety of professional settings around the world. He’s also adept a number of other instruments, so picking up the Alphorn, which is played much like a bugle in that the notes are controlled by the hornists’ lips, was not difficult.

Roberts says Alphornists actually can do pretty well in Europe, where the festival and special event circuit creates a demand for authentic music on heritage instruments. But he didn’t take up Alphorning as a career. It was just another new experience for an American musician living in Europe.

Roberts got his alphorn start while visiting a friend in the Swiss countryside one day. They heard alphorn notes echoing in a nearby valley. Roberts was curious, so he and his friend hopped in a car to find the musician.

“It was this old farmer who would play in the evenings before sundown,” says Roberts. “He spoke Swiss French and Swiss German, so I tried to speak German to him. At first, he was really shy and timid, but eventually he loosened up.”

After some bilingual haggling, the farmer gave Roberts an impromptu Alphorn lesson. An invitation to sip some homemade wine ensued, followed, of course, by more alphorning. By the end of the evening, Roberts was sounding pretty good.

Or maybe that was just the wine.

Whatever the case, Roberts eventually became skillful enough to land actual gigs. Eventually, he decided he had to have one of his own. Roberts commissioned a pine and walnut Alphorn from a German carver. It took a year to be fashioned.

Roberts continued his alphorn education. The instrument, which may date back more than 600 years, was used as a signaling device. It was also used to direct mountain herds, especially cows, and even to “calm” the cows at milking time. Roberts says what’s most interesting him is the variety of calls.

“Different calls were indigenous to each valley,” says Roberts. “Everyone had their own calls. That’s how they communicated through the Peasant Wars (civil uprisings in the Swiss and German Alps in 16th and 17th centuries).”

But that’s not how they advertised throat lozenges. The three-note Ricola tune is an alphorn impossibility.

“It’s just not possible because of the pitch and the intervals between notes,” says Roberts. “So, the one song it’s really known for, you can’t play.”