Mechanical Engineering degree is next on the drawing board at FMU

Francis Marion University’s first engineering program was launched in 2014 – a new major in Industrial Engineering started that spring – and is now nicely underway.

The university’s first class of IE majors graduated in the spring of 2017 and every member of the class were, as predicted when the program began, quickly snapped up by eager employers . Fueled by that momentum, the program is growing fast. Class sizes projected to double, and then double again.

So, a good start. Now what? Well, how about some more engineering? 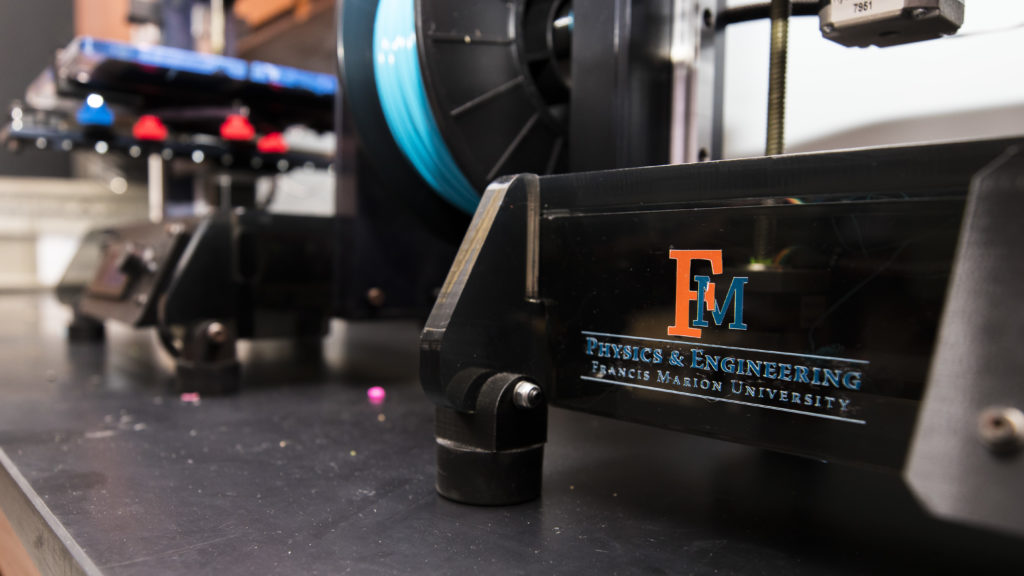 It could be on the way soon. The university formed a new faculty committee last fall, tasked with studying the feasibility of a new program in Mechanical Engineering. The study group is chaired by Dr. Derek Jokisch, chair of FMU’s Department of Physics and Engineering, and is expected to have a preliminary report ready early this spring.

If the committee returns an affirmative report, the process on turning the new program into a reality could began this year with an eye towards enrolling the first ME students by 2020.

“It’s exciting,” says Jokisch. “It’s really hard to think of how far we’ve come in this area in just a short time.”

FMU President Dr. Fred Carter and other university officials settled on Industrial Engineering as the school’s first engineering program six years ago because state and local industrial leaders told them there was a demand for that expertise, and because it fit nicely with FMU’s existing curriculum in Physics, Mathematics and Business.

Industrial Engineering blends hardcore engineering studies with other, less technical disciplines, to create a knowledge base built for tackling broad problems. Industrial Engineers are, at their core, problem solvers who seek efficiencies in processes as diverse as human resource management, logistics and manufacturing practices. IE’s work in a wide variety of industries and often zoom up corporate ladders into managerial roles. Their expertise – making business more efficient – is, after all, what corporate leaders are expected to do.

The reasoning behind adding Mechanical Engineering as a second engineering degree at FMU follows a similar path. Ever since launching the IE program — and actually, even before that — the university has heard the call for ME’s from industries in the region and the state. As always, it will do its best to answer.

There are sound  internal reasons for adding ME as well. It’s easier to see a smooth connection from IE to ME, than it is from IE to other potential engineering additions.

“Mechanical Engineering and Industrial Engineering have been closely related since the inception of IE as a field of study,” says Jokisch. “When we begin looking at the possibilities, it was obvious that Mechanical would be a good choice.

“There is a good correlation with many of the courses we already offer in IE and in Physics and Mathematics, which means we could bring this on more efficiently than some other engineering specialties,” says Jokisch. “The addition of faculty will be the biggest part, so being able to use some existing faculty, or having faculty who can teach courses in both areas is an important consideration.” 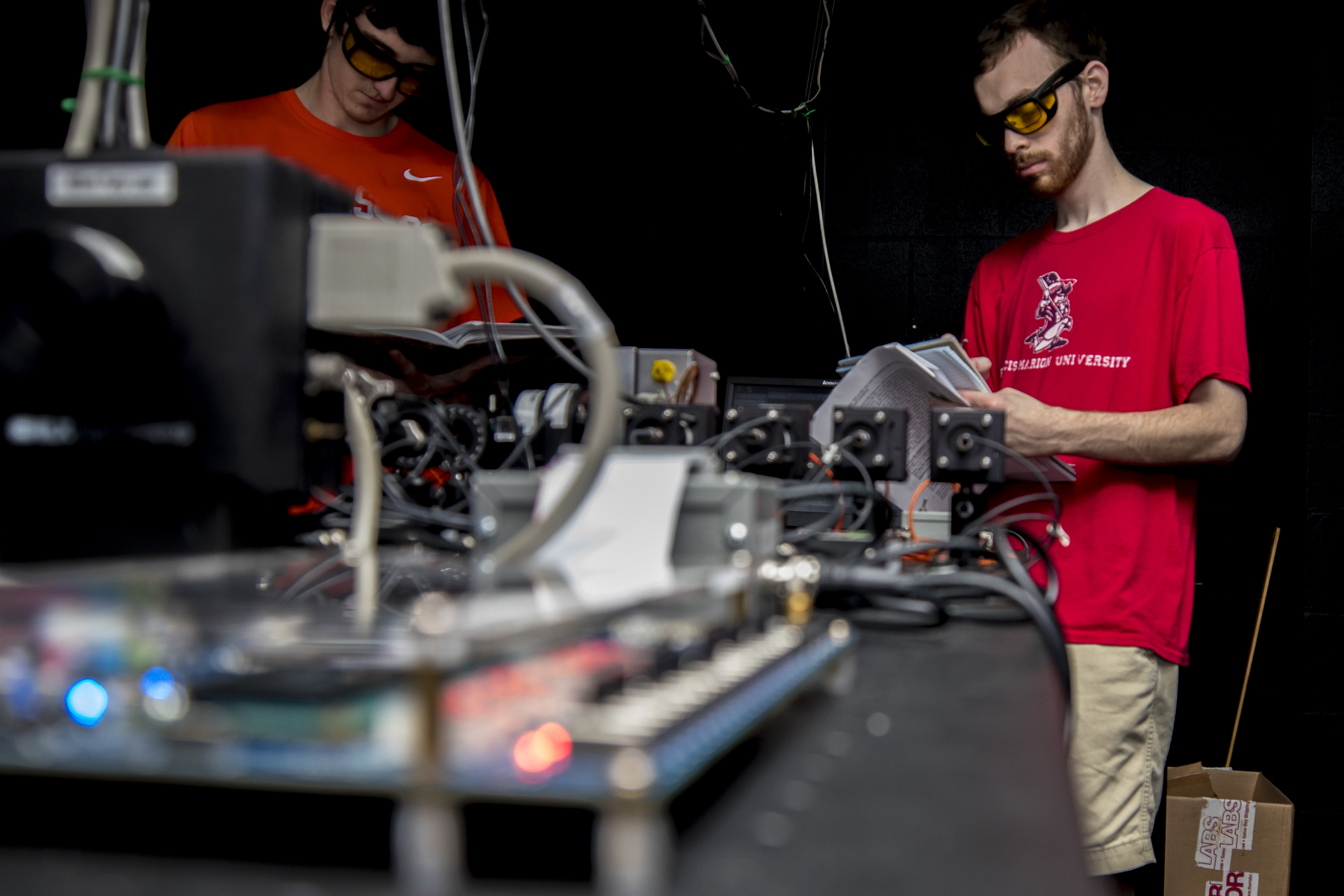 Mechanical Engineering is the engineering of motion. ME’s study kinematics, the transfer of energy and precision design, and apply the sum to a variety of industries.

The are just under 300,000 Mechanical Engineers currently employed in the United States. It’s the second-largest engineering group behind Civil Engineers (Industrial Engineers are a close third).

ME’s are concentrated in the automotive, energy generation and, notably for engineers coming out of South Carolina universities in the years ahead, aerospace industries. They’re also heavily utilized in the field of robotics, another area that only figures to grow throughout the 21st century.

Eventually, if the decision is made to proceed towards the ME program, FMU will hire a consultant to help guide it, as it did with IE. But in the early stages, having an ME (Dr. Renu) around has been, says, Jokisch, “a huge help.”

The feasibility study group has much more to digest.  Facilities — a building or room for testing engines for example — must be considered, and the question of need and the availability of qualified students will be addressed, too.

There are important points that are not in question, too. FMU has demonstrated an ability to produce a high-quality engineering program, and it has the perfect place — the exisitng Department of Physics and Engineering — to house it.

Physics at FMU was once a part of a combined department, along with Chemistry. It became its own department — Physics & Astronomy — in the 1980s and has long held a reputation for program rigor. 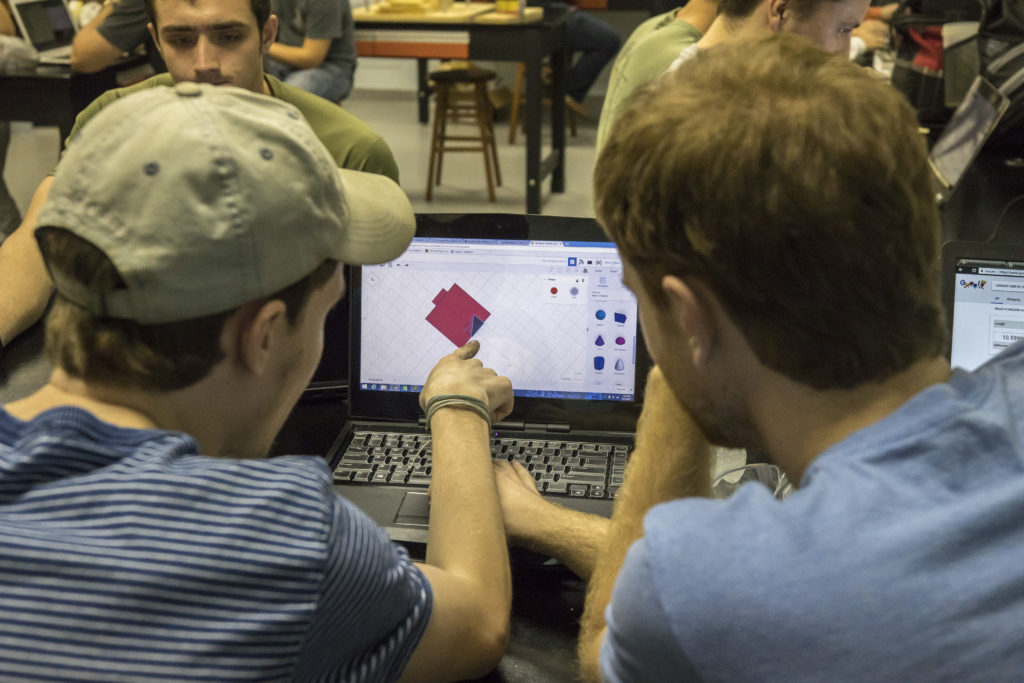 Jokisch, who leads FMU’s well-regarded Health Physics track, has been a member of the FMU’s Physics depratment since 1999. He says adding Mechanical to the current department should work well, just as adding Health Physics and Industrial Engineering did before that, because it connects with the department’s long-term persona.

“There’s a certain short-term momentum produced by our recent (IE) grads and the success they’ve seen,” says Jokisch, “but there’s some longer-term momentum as well, a continuation of the high standards that this department has held for a long time.

“There’s a feedback loop of sorts,” says Jokisch. “Students go through the program here, and it is difficult, the standards are high. But then they move out into the workplace, begin a career,  as many of our Health Physics students have, in jobs overseeing safety at a nuclear plant, and there are some pretty high standards there, too, and they kind of get it. ‘Oh, that’s why they were so serious about this at the university.’

“When engineering arrived, it was a perfect fit in that regard,” says Jokisch. “It’s demanding in its precision. So that meshed with the departmental philosophy. Mechanical Engineering should be no different in that regard.”

President Fred Carter says ongoing discussions with local and state business leaders suggest a continued expansion of engineering at FMU. Electrical engineering and other specialties are only the horizon. More engineers in a variety of fields are needed and they’re needed in South Carolina and the Pee Dee.

“It makes sense that students who are educated here, who work in an internship while they’re here, will be more likely to continue a career in this region or in the state,” says Carter. “Educating students in this region, for this region, has always been our mission. If that mission needs to take us into new fields, then so be it.”