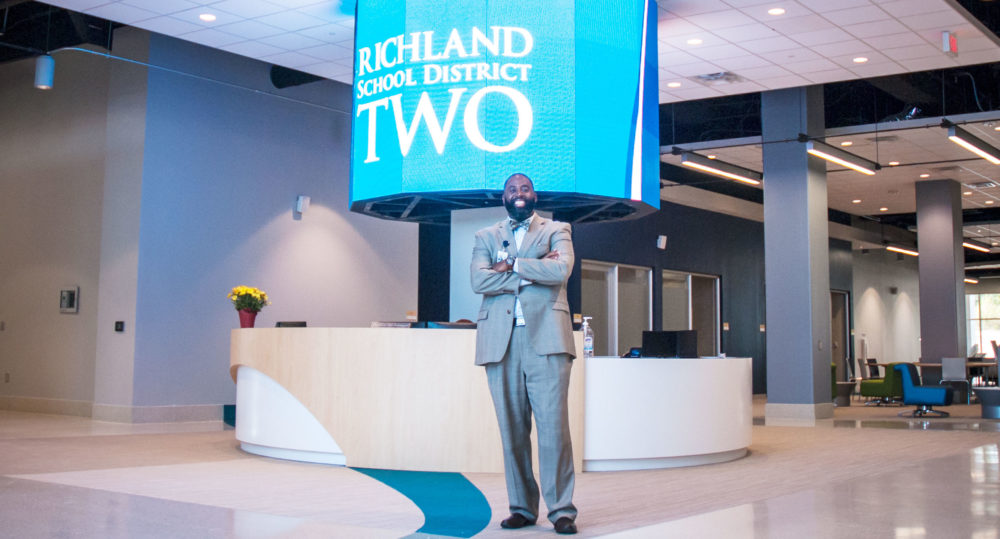 There was one point in his life where Dr. Baron Davis (‘95) was unsure of what he wanted to do with his life or what he would become.

Back when he was a student at Francis Marion University.

There’s no question today. The 46-year-old Davis is the superintendent elect of Richland School District 2 in Columbia, a fast-mover in the world of public education with a bright future ahead of him.

Ironically, Davis says he wouldn’t be where he is today without those uncertain times of days gone by. Yes, he was adrift academically at FMU, but he was making progress all the same. If the classroom wasn’t quite his thing, it was evident to Davis and others that – somehow, some way, some day – he was going places.

“I really didn’t have a lot of plans (while in college),” says Davis. “I kind of fluctuated around, here and there. (But) I was provided with a foundation of skills and knowledge that as I progressed through my career has really helped. (And FMU) also provided a great support system… They allowed me to make mistakes and recover from those mistakes.”

In part that leniency is just the way FMU’s faculty and staff treats most students. They’re almost always willing to offer a second (or third, or fourth) chance. But much of it was special attention for a young man who clearly had great potential.

Dr. Joseph Heyward, who served as the vice president of student affairs and interim provost on three occasions at FMU, knew Davis well. He says that despite some hiccups, it was obvious that Davis was going places.

“He was a student that I knew at one point would be very successful,” Heyward says. “Baron, I thought had leadership qualities, and I just had the feeling that he would be a success in his life. I wanted him to find a path where he could utilize those skills, and I think he did. From his activeness and the leadership that I saw in him, I’m not surprised that he’s made it to where he is.”

It wasn’t hard to picture Davis as a leader in college. He was active in a variety of student organizations – Omega Psi Phi fraternity, residence advisor, orientation leader, among others – and was frequently among the leadership.

All he needed was a career field in which his natural talents could be applied.

With help from Heyward and some other mentors from his FMU, Davis eventually developed an educational plan with more structure. Growing up and maturing, helped. The net result was that Davis returned to his hometown, Columbia, and a few years after graduating from FMU, went to graduate school.

The once lackluster student was about to become an educator.

Davis was a better student this time around. He earned an Education Specialist degree in 1999, landed a job at Spring Valley High School, and completed his Masters in Education in 2003. Five years later he earned his doctoral degree.

Davis says he now believes he was meant to be an educator all along, but just didn’t understand that call when first he heard it.

“I think it was a calling,” he says. “Maybe I just wasn’t paying attention to the calling before. I always had a knack for working with people and education has been a good vehicle for that. Once I got immersed in it, I no longer had to figure out what I wanted to do. I’ve never questioned if this is the right place for me.”

Looking forward to the challenge

“We’re shaping our district for tomorrow,” Davis says. “We have an opportunity to impact things on a much larger scale.”

He’ll embrace the future, but Davis figures to employee many of the same skills he’s used throughout his career in his new post. Sure, there will be plenty of administrative analysis. But what’s powered Davis’ career is interpersonal connections and real passion for the schoolhouse.

I think every kid needs to feel like there’s one person on campus…that cares about them.
Davis says that when he was a principal, he became a part of the environment at each of the schools he served. He still enjoys remembering the first days of school, homecoming dances, first home football games, and prom. There is an energy and dynamism to those days which is difficult to describe or to capture, says Davis.

“There’s nothing that compares,” he says.“The energy is so different. It’s a refreshing new start and everyone is energized. You have the first home football game, and so many other things. Homecoming, Prom and those are just some of the social things. On the academic side, working with students and seeing them achieve their goals. Seeing the kid that applied to their reach school and got in.”

Davis hopes to continue that with programs like Richland 2’s face-to-face mentoring program, which assigns an adult to every student for one-on-one mentoring. Davis, who has had a hand in implementing the program, is proud of what it has accomplished, and can continue to accomplish, in the future.

“I think we’ve done a phenomenal job of implementing a very structured mentoring program that all of our programs within our schools follow,” he says. “It’s great to see these students develop, and for them to have that person they can connect with on campus. I think every kid needs to feel like there’s one person on campus at school that cares about them.”

Davis will have to balance one-on-one work with the strategic oversight needed in a big district. While he likes the frontlines, he says he’s looking forward developing grand strategies and affecting change on a wide scale.

“I think I enjoy the interactivity and connectedness of all departments that have an impact on the overall success of the district,” he says. “Having an opportunity to have discuss, and to be able to lead the direction when it comes to academic achievement, and our focus for the year on academics is really great.”

“I have had the pleasure of working with Baron and calling him a friend throughout his career in education,” she says. “His dedication to servant leadership instills confidence in his colleagues and I am confident those qualities will lead to success in his next endeavor as superintendent in Richland School District 2.”