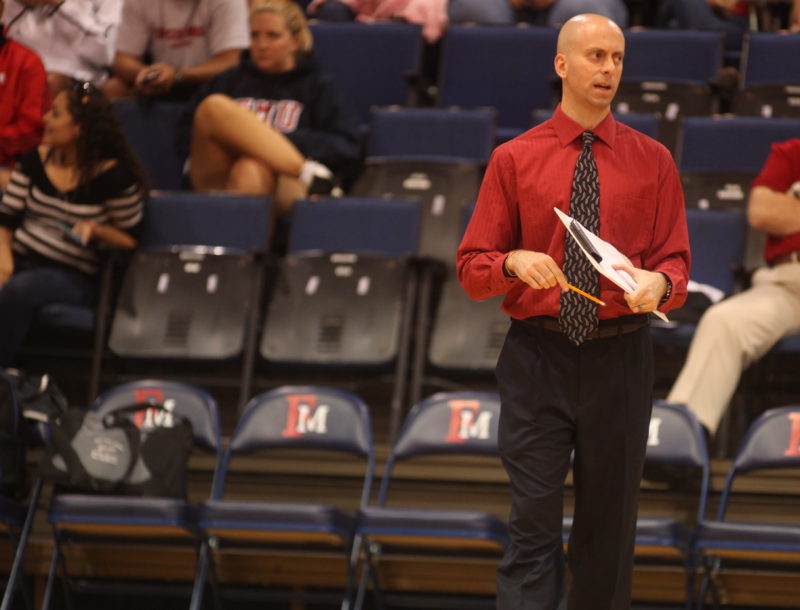 MacDonald’s moves from volleyball to serve as purchaser

McDonald moved across campus on January 1 and is now the university’s new director of purchasing.

Volleyball coach to managing a purchasing operation for a state agency — that’s an unusual career twist. But it’s actually quite natural for McDonald, who majored in supply chain logistics in college, and spent five years in private section purchasing and logistics before diving into coaching.

McDonald says he’s going to miss coaching, but he’s excited about the opportunity to stay in Florence and at Francis Marion. And, he’s delighted to moving back into purchasing. It may not be everyone’s cup of tea, but he’s always had a passion for logistics, too.

“The school is going through a lot of changes,” says McDonald. “Adding new academic programs at the rate the university has been of late, there’s going to have to be some sharp procurement to satisfy them. The variety of purchasing at FMU is really what I’m excited to get into, because it’s very different than procuring just one item at a time.

“There’s going to be some really neat challenges,” he says. “Purchasing at a state produces a lot of unique nuances. Following the state code is important and that was something I didn’t have to do because I was in the private sector before getting into volleyball.”

McDonald’s new post will give him the ability to showcase his business acumen while also redirecting his competitive nature into a position with hours that better suit McDonald’s family life.

But it will take him away from volleyball, a sport that McDonald came upon late in life, but which seized him once he did.

McDonald, a native of Flat Rock, Michigan, didn’t play volleyball in high school. In fact, he didn’t really know much about it all until he and some college friends at Michigan State began playing the two-on-two version of the game as a hobby. McDonald was pretty good at it and found it fascinating.

After graduation, he continued to play the sport. He began to coach it, too. He landed assistant coaching positions with club teams, and eventually landed a spot as an assistant at Oakland University in Rochester, Michigan.

McDonald continued to gain experience as a coach while earning his master’s degree in physical education from Wayne State University. In 2002 he was hired as head coach at Mount Mercy College in Cedar Rapids, Iowa. In his first season he led Mount Mercy to a second-place finish in the Midwest Classic Conference and, for the first time since 2002, a spot in the NAIA Region VII Tournament. He was named the MCC’s coach of the year.

“I was really looking for a better opportunity and Francis Marion came up,” he says. “I didn’t know much about the school because I’m a midwestern guy, but when the opportunity came up, I was thrilled.”

McDonald’s first Patriot team went 26-8 record and won a share of the regular season Peach Belt Conference championship.In 2008, MacDonald earned PBC “Coach of the Year” honors while guiding the Patriots to a 23-9 record and a birth in the NCAA Division II National Tournament invitation.

“We’ve had some really good people in the program,” he says. “We’ve had girls that are balanced as student athletes and we’ve tried to have that reputation on campus… We see football and basketball players on television (at other schools) and we sometimes learn they’re not the best students, so now suddenly, athletes in general get a bad rap because they’re seen as bad student athletes, but that’s not the case here at FMU. I’m proud to have been part of a program like that.”

While he was not the typical collegiate volleyball head coach with the traditional playing history, the perspective MacDonald was unique and provided valuable insight into what is necessary to succeed.

McDonald’s work as a coach at FMU earned praise from players, and form his boss, FMU Athletic Director Murray Hartzler.

“While we are sad to see him leave the coaching bench, we are happy that he is staying a member of the FMU family,” Hartzler says. “His squads represented the university with the utmost pride and dignity, as evidenced by multiple American Volleyball Coaches Association All-Academic Team awards.”

Jessica Imbimbo, a 2015 Francis Marion graduate and a four-year member of McDonald’s volleyball teams, says MacDonald’s ability to motivate his player stood out.

“Coach related to us as individual people rather than players,” Imbimbo says. “He got to know us on a personal level and recognized different personality traits and coached accordingly…He was able to better understand what motivated each individual player and established unique relationships with each of his athletes.”