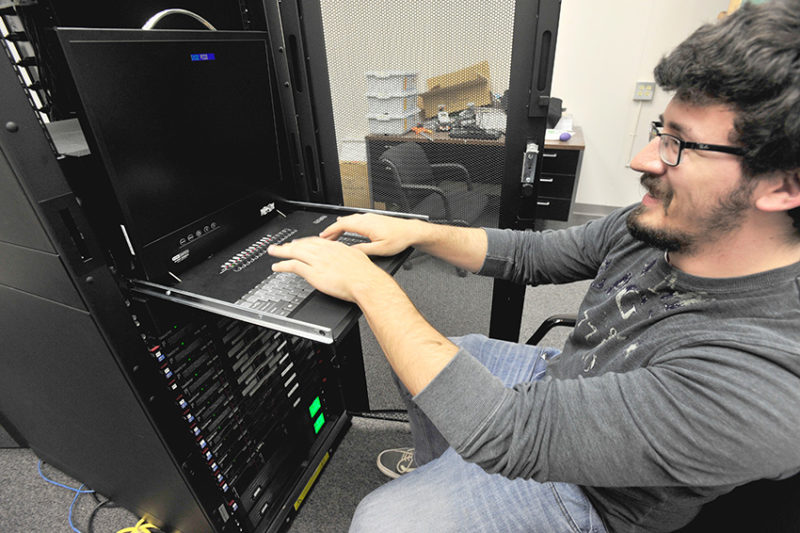 When Jason Harrington decided to turn his aptitude for all things mechanical into a degree in Computational Physics at Francis Marion University, he knew he’d have to get a little faster at math.

But the blazing fast speeds at which he found himself working his last two years at FMU? Let’s just say his mind has been blown.

Most of the credit for his speed, and the ensuing astonishment, goes to an innocuous pile of circuits, wire and sheet metal that sits in the middle of a small, first floor room in the Leatherman Science Facility on the FMU campus. “It” is the “Patriot Cluster,” the official name of FMU’s first-ever super computer. The two-year-old machine, funded by a National Science Foundation grant and actually assembled by two (now former) FMU students, contains the processing power of 160 ordinary computers, although as Dr. Larry Engelhardt, associate professor of Physics notes, it’s really more powerful than even that because of its high-powered graphics chip and the fact that stacking groups of processors together multiplies power instead of just adding it.

“It’s hard to describe just how much more powerful, how much faster it really is in terms that normal computer users might understand,” says Engelhardt. “It is like having 160 computers, but it’s really more than that. It’s 160 computers working together. It’s so fast it’s kind of hard to imagine.”

Supercomputers really aren’t rare, but is unusual to find them at a regional state university.. The professional connections of several FMU faculty members, combined with a willingness to open the door when opportunity knocked, gets credit for bringing the technology to the school. 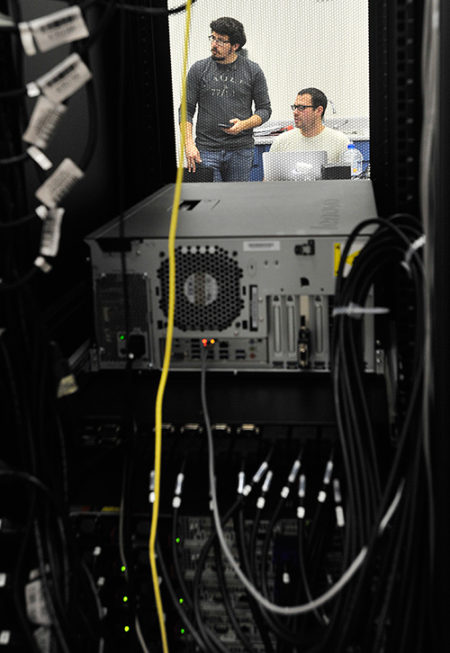 Former physics professor Jacob Moldenhauer cooked up the idea of applying for a grant to fund construction of the “Patriot Cluster.” Much of the paperwork was already in place when Moldenhauer left FMU for a job in Texas in 2013. Dr. Engelhardt, and his Department of Physics and Astronomy colleague, Dr. Ginger Bryngelson, took over as project coordinators, along with Dr. Galen Collier, a computational scientist from Clemson University who served as the project’s chief technical consultant. The NSF grant that funded the FMU cluster was actually a sub award of a grant for a larger cluster at Clemson.

The $100,000 grant for the “Patriot” was mostly for materials – the university had to purchase 160 computer processing units, 2,496 graphic processor components and all the wiring and associated materials needed to connect them.

The grant team, led by Collier, designed the device. Remarkably, it was assembled by FMU students, Chad Garland and Will Dixon.

Both students were studying computational physics with Engelhardt, and both completed research projects just as the need for some “cluster engineers” manifested itself.

Dixon, a long-time computer tinkerer with some experience in networking, provided the technical genius. Garland, who came to FMU planning to study Spanish before switching to computational physics “because it was more of a challenge,” supplied all kinds of support. He created a computer program for monitoring the temperature of each of the 160 CPUs (overheating for large computer arrays is a significant problem), helped assemble a parts list and created an “operator’s manual” for his fellow students and professors.

Garland says actually building the device wasn’t that big of a deal. Once the parts arrived, he and Dixon assembled them in a “couple of days.

“The hard part was getting all those computers to talk to each other,” says Garland. “You don’t have much if that doesn’t work.”

Fortunately, Dixon and Garland had practiced the networking/computer conversation aspect with a roomful of aging, abandoned machines they pulled together and named the “Low-Performing Computer Cluster” or the “LPCC.”

“It was kind of a mess,” reports Garland. “But, incredibly, in about two weeks, Will got them all talking to each other. He was the real genius in that area. And then, after we got the Patriot Cluster built, he had that working in about a week.”

Users of the cluster have been pleasantly surprised. Dr. Allen Clabo of FMU’s Department of Chemistry says the cluster is “extremely well designed. It’s more than I would have imagined.”

At its core (no pun intended – this is a serious science story), a supercomputer is simply a lot of processing power connected to the same power supply and control system. One hundred sixty processors can, in fact, do more work than one, 1.6 or 16.

Translating that computing power in laymen’s terms isn’t easy, since most laymen don’t attempt calculations of any great complexity. But it’s not hard to describe for a student involved in, or on the cusp, of serious research in disciplines like Computational Chemistry, Computational Physics, or even just plain old Computer Science.

A relatively simple Computational Physics problem – one that majors at FMU and elsewhere work on at an early stage of their academic career – is modeling the motion of a liquid in a beaker. The computer model envisions a liquid that contains a small number of molecules – 500. Some initial movement is considered and added to the equation and then the chain reaction begins. Each of the actions triggers another set of calculations which predicts movements that trigger still more calculations.
Cody McKenzie, a junior from Dillon, S.C. who is majoring on Computational Physics, says problems like that, and the calculations that accompany them, are “mind boggling if you stop to think about it.

“So,” says McKenzie, “the best thing is just not think about.

“In computational physics, you’re getting into problems that essentially can’t be solved numerically. You just can’t do it,” McKenzie says. “It has to be done algebraically, and there are many computations that have to be done in sequence. Just showing a minor change over the time of say, one second to five seconds might mean 5,000, 10,000 steps, each with five or six or 10 calculations inside. It’s hard to get your head around it, but, this machine (the cluster) can figure it out in a couple of minutes.”

Patricia Snowden, a thoughtful junior from Florence who is planning to go on to dental school, is part of a team of Chemistry majors who are among the Patriot Cluster’s biggest users. Some Chemistry problems ran on the FMU supercomputer for more than a month straight this spring.

“Of course, it would be unrealistic, completely stupid really, to try to work those problems some other way,” says Snowden. “If you have everybody working together on their own computer it would take them like, a couple of years or something. Basically, you’d just never do it.”

Like most cluster users, Snowden struggles to find “normal” language to explain her academic work. Indeed, Snowden says one of the more interesting aspects of using the Patriot Cluster is discussing just what she’s doing with family and friends.

“Here I am, in my pajamas, creating gigantic, fictitious molecules by sending data from my laptop to a supercomputer I’ve never even seen,” says Snowden, “and then my mom will ask me, ‘so what are you doing in school?’ All I can do is shake my head.”

In attempting to quantify the benefit of the “super computer next door,” Clabo, Snowden’s mentor, notes that there are some problems he’s been trying to solve, or have his student’s solve, for years, that are just now moving forward. The supercomputer has been the key to that, unlocking “increments of knowledge that we just couldn’t hope to reach before.

And maybe the biggest surprise,” says Clabo, “is that the capacity of the Patriot Cluster is not just hard to imagine, it is, so far, beyond the imagination of some very imaginative students.

“Every semester the students think of something new for us to try (with the super computer,” says Clabo. “Every time I think, ‘well, this will break it.’ But so far it’s been up to the challenge.”

We’ve got one at FMU

As the student users of the FMU cluster prepare to move on to graduate school or jobs with big, technical firms, all have come to realize that almost any career path connected to their major will be lined with super computing.

Austin Freeman, a senior from Darlington who’s eyeing a Mechanical Engineering degree and a career in aerospace design after he leaves FMU, says even performing (relatively) simple problems on the FMU supercomputer will be a big plus down the road.

“These are the kinds of project I might be working on someday in aero technology – more complicated than this, but like this — so it’s good to see a device like this, to have that experience now,” Freeman says. “Perhaps you could simulate in some way, but I don’t think it would be quite the same on somebody else’s computer.”

Jason Harrington, the mechanic-turned-physicist, is headed to a post-graduate internship at Sandia National Labs in Albuquerque, New Mexico, then to graduate schools. At both stops, he knows one of the first things he’ll be asked is, ‘have you worked with a cluster, a supercomputer?’

Snowden, the future dentist, likely will see less direct benefit, but she “gets” the power of going to school with your very own super computer.

After presenting a project poster last fall at the Southeast Regional Meeting of the American Chemical Society (SERMACS) in Nashville, Tenn. – her poster’s snappy title was “Systematic Computational Investigations of the Hyperpolarizability of Organic Molecules” – she found herself swamped with questions from students attending small-to-medium-sized schools like FMU.

“They really weren’t interested in the poster,” says Swanson, “but believe me, they wanted to know how to get a super computer. I told them, ‘well, I guess you could come to FMU. We’ve got one there.’

“I have to say, that felt pretty good.”