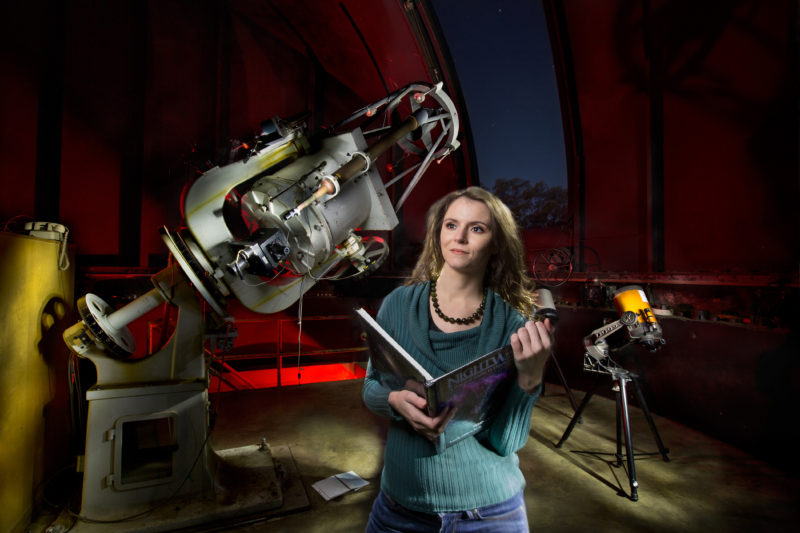 Dr. Renata Cumbee (‘10) is studying the origins of the universe, while thinking about her own.

Peering into the murky, almost impenetrable history of the universe, Renata Cumbee (‘10) discovered her future.

A bright, but-less-than-confident student from Cordesville, South Carolina has turned into a top-flight physicist — that’s Dr. Cumbee now — who spends her days examining black holes and X-rays in the Astrophysics Science Division at the NASA’s
Goddard Space Flight Center.

More specifically, Cumbee researches a physics process called charge exchange. She studies the remnants of supernovas called the Cygnus Loop — a remnant of a supernova explosion in the Cygnus Constellations long ago — and the modeling of
the X-rays produced within the Loop.

Cumbee’s research helps to provide an understanding of the energies possessed within galaxies as they form comets and supernova remnants. In effect, it advances the long-standing goal of physics: to understand just how and why the universe
began.

“I really enjoy (the work) because it’s going to have a substantial influence on what we understand in the future,” says Cumbee. “It is inspiring to know that my research will have an impact on our understanding. In 50 years or 100 years, it will continue to have an impact and that excites me everyday.”

Much of that excitement began during her days at FMU. Cumbee says that she enjoyed her academic life in the FMU Department of Physics. She worked hard in the classroom and was a top student, winning the 2009-2010 Physics Award, presented by FMU’s physics department. But what really motivated her – what put a charge in her so to speak – was her learning outside of class through independent study and research projects. Notably, that’s a feature of undergraduate Physics work at FMU, though it not necessarily that way at all universities.

“From the very beginning, Francis Marion emphasized the understanding of the material, rather than simply memorization and getting straight A’s,” Cumbee says. “All of the professors encouraged me to do research for myself outside of the classroom.”

Those same professors also took Cumbee under the wing, offering tutelage not just in the specifics of the science, but in the generalities of being a practicing physicist.

“I had hours of one-on-one time with professors any day that I needed it,” says Cumbee. “For someone who’s not confident in a subject, and not sure if they want to continue with that subject, that can be the biggest benefit. Having someone show you what it means to be a researcher in physics or to study that subject is important.”

As a student, Cumbee found herself at home as not only a researcher of physics, but as a teacher of the subject as well. She participated, as a college student leader a crop of high schoolers, in the South Carolina Physics Scholars Institute, an annual program at FMU that’s designed to introduce high school students to Physics. At the event, Cumbee became accustomed to working with students and explaining the nature of physics on a much more basic level. With that understanding, Cumbee was certain she wanted to take her education of physics to the next level.

“It’s a great way for high school students to engage with college students and to learn what physics was about,” she says. “Having that opportunity to teach younger students was really beneficial. It helped me understand physics a lot better and it gave me the opportunity to realize that I wanted to study physics.”