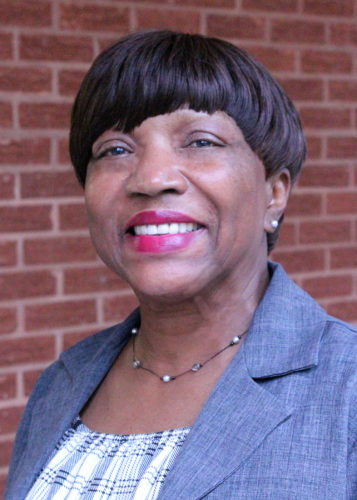 For more than 30 years, Rannie Gamble has helped maintain order in one of Francis Marion University’s most challenging environments — the Provost’s Office.

Beginning in January, that will be somebody else’s job. Gamble retired in December after 32 years at the university.

Provost Dr. Richard Chapman, who worked with Gamble for more than half her time at FMU, says he’s still trying to figure out how the office will function in her absence.

“The institutional memory she embodies… We depend on her for so many things,” says Chapman. “I find it difficult to imagine this office without her … the Provost’s Office is really going to miss her.”

Gamble was feted by colleagues at a special reception in early December. Then, at FMU’s Fall Commencement, Gamble was awarded an Honorary Degree. That’s a rare accolade for an FMU staff member, but given Gamble’s seemingly endless commitment to the proper handling of a vast array of tasks, it’s fitting.

Gamble was hired at FMU in 1983 as a secretary for the Provost’s Office, but was quickly promoted to administrative specialist. She’s held her current position — senior administrative associate — since 1994. Gamble’s essential role is to manage the daily operations of the office. She works closely with department chairs, deans, faculty and students; and oversees preparations for commencement exercises (she’s helped plan more than 60), and other annual campus events. But her unofficial duties go well beyond that. Gamble has also spent time are more mundane tasks, like helping new faculty settle in or finding lost keys.

Chapman calls Gamble “a great organizer … who operates efficiently and effectively behind the scenes to get things done.”

“Rannie Gamble is an expert at academic triage,” says Flannagan. “She’s given a situation, figures out the best solution quickly, and moves the problem toward solution. … She knows just what needs to be done.”

Gamble seems to operate effortlessly, turning out documents, plans and needed information at just the right time. But she says all is not always at it seems.

There was a day — maybe more than one — when the chaos of the office overwhelmed her.

“I had gone home all out of sorts (one day),” says Gamble, “and the next day I came to work in my bedroom shoes and threw my keys in the trash.”

She smiles at the memory now. It’s part of a treasure trove of priceless memories that she’ll carry with her as she rides off into the sunset.

Gamble is a Darlington native. She and her husband Steven have one son, Robert Douglas, six grandchildren and one great grandchild.