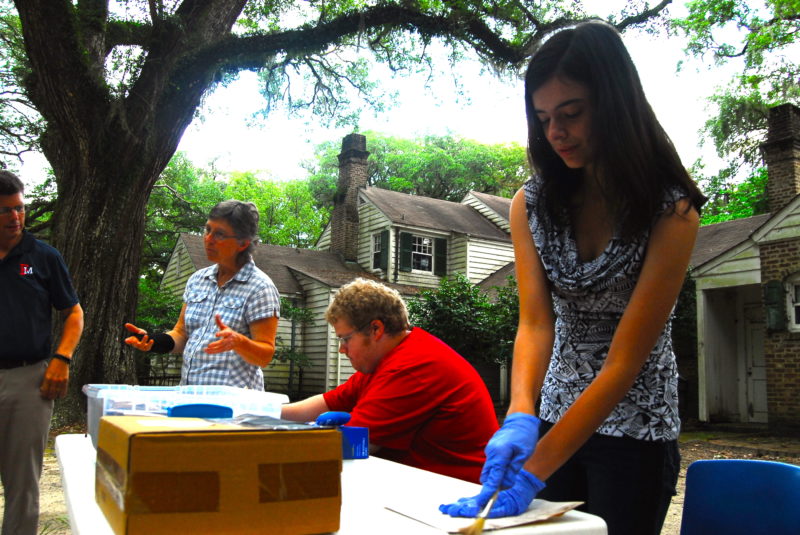 Who said research isn’t glamorous? A new wave of FMU students are getting their hands dirty at Hobcaw Barony on the S.C. Coast

Working in the summer heat, pawing through musty records inside an old house while wearing a hazmat suit, may not sound like a summer dream job for most, but two Francis Marion University students thought it was just fine.

They probably won’t be the last ones who’ll see it that way either.

Corey Parker and Kim Boswell sweated their way through a portion of a major research project at Hobcaw Barony near Georgetown, SC. They were assisting Dr. Lynn Hanson of the FMU Department of English on the latest leg of her three-year-old research project aimed at preserving the legacy of philanthropist and conservationist Belle Baruch. The student’s work involved mining the basement (and some other areas) of Baruch’s home at Hobcaw (known as “Bellefield”) and then performing some basic preservation and cataloguing work on the documents uncovered. They also began organizing a system for future researchers to use at the site.

Parker, a junior History major from Bennettsville, SC, called the experience “eye opening,” both in terms of learning about Baruch, a fascinating personality from the 20th century; and in discovering what really goes into serious research.
“I certainly learned what real research is all about,” says Parker. “You just dig and dig, and then you dig a little more. That was a lesson all by itself.”

But the highlight of her summer was finding a check written by Baruch to Edith Boling Wilson, the window of U.S. President Woodrow Wilson. Belle’s Baruch’s father, Bernard Baruch, was an advisor to President Wilson (along with five other presidents), and Belle’s later friendship with Edith Wilson developed through that connection.

“It’s just so interesting to hold a piece of history in your hand like that,” says Boswell. “It’s fascinating to learn about people you never knew about before, and also to imagine that you’re contributing to that knowledge by uncovering something no one knew existed.”

Hobcaw Barony is an 18,000-acre coastal retreat purchased by Bernard Baruch in 1905 and placed into permanent conservation by Belle Baruch in the 1960s. It’s long been fertile research ground in the life sciences – forestry and marine biology, in particular – for a number of South Carolina colleges, Francis Marion University included. But’s only now moving into another phase where it will become just as useful to an array of researchers in the humanities.

The site has been inhabited for thousands of years and offers a trove of opportunities for historians, sociologists, psychologists, political scientists and more. It was the site of an extensive pre-Columbian culture – the name Hobcaw means “between the waters” in a native American language – but has been in use by colonial and American cultures since the first explorers and settlers arrived. The famed “King’s Highway” passed through the site, the current acreage was part of three different plantations, and there are number of sites associated with slaves and slavery, included the partially stabilized Friendfield Village site.

And then there are the Baruchs.

Bernard Baruch, a Camden native, is one of the legends of American finance, philanthropy – and politics. He moved to New York with his family in 1881, excelled in school and banking and purchased a seat on the New York Stock Exchange. He made a fortune before he turned 30 and spent the remaining 60-plus years of his life as a philanthropist and advisor to seven different presidents, but most notably Wilson and Franklin D. Roosevelt.

As part of his life of leisure, charity and governmental consulting, Baruch purchased Hobcaw Barony, assembling the majority of the property in1905.

The Baruch’s purchase was part of what is sometimes known as the “Second Yankee Invasion,” a period of time when wealthy northerners bought up thousands of acres in the South. That was particularly true in the coastal area around Georgetown. The Baruch’s “next-door neighbors” included the Huntingtons and the Yawkeys, among others.

Celebs by the boatload

The northern transplants used the land primarily as a hunting retreat. The Baruch’s were no different. They built a large residence on the property after the house that came with the largest piece of the estate burned, but they also built a number of smaller “camps” and cabins to facilitate hunting across the property’s great expanse, and eventually constructed Bellefield and its stables and other out buildings for daughter Belle.

The Baruchs entertained celebrities by the boatload (literally, in this case – during its prime, Hobcaw was accessible only by boat). Included among them was FDR and Winston Churchill.

Belle is an interesting, if somewhat overshadowed character as well. She was a skilled sailor, hunter and equestrian who lived openly as a lesbian; an almost unheard behavior at that time in America. Her life has been chronicled by one biographer, but much remains to be learned.

The Belle Baruch Foundation, created to administer the property upon Belle’s death in 1964, is now old enough to be a subject of inquiry on its own. Hanson wrote grants to begin that work several years ago, twice earning Harry M. Lightsey Visiting Scholar grants to spend part of her summer at Hobcaw. She is working with the foundation on its continuation.

Dr. Chris Kennedy, a history professor at FMU and Corey Parker’s advisor, ripped off a list of more than a dozen potential research ideas after visiting Hobcaw this summer.

“There’s several lifetimes of work there,” says Kennedy. “We need to connect the people to the place.”

Hanson says a study of the Baruchs alone could keep a small army of scholars and researchers busy.

“It’s just astonishing,” she says. “Every time you turn around, there’s something new. It’s a great environment for research and a great tool to teach our students.”

Meanwhile, back in the summer heat at Bellefield, Parker and Boswell continued to turn all kinds of stuff.

In the attic, there were more stacks of checkbooks, and a small datebook maintained by Ella Severin, one of Belle’s friends. In the basement (which includes a bomb shelter, complete with a hand-cranked air purification system) were livery for Bellefield’s servants and some of Belle’s riding clothes. It’s not exactly what they were expecting to do, but Hanson and her students wound up spending some time pulling the best of that collection out, and cleaning it up a bit. Hanson is now researching what specialists might be brought in to see about restoring and preserving those period costumes. Of particular need – a millinery preservation to do something with Belle Baruch’s snappy collection of hats and riding helmets.

“Finding all that stuff was just so cool,” says Boswell. “I never imagined.”

Most of their summer work has been spent on more mundane tasks. The two students gave sometimes moldy (hence, the need for hazmat suits), always dirty, documents a light dusting, scanned them into a laptop, and began organizing the catalogue.

Working with the Belle Baruch Foundation and several other state universities, FMU is moving towards establishing a formal research institute for the humanities at Hobcaw. A recent change to the Foundation’s mission calls for that and nearby state universities seemed obvious partners.

It’s important work, says Hanson, and as she and Kennedy noted, it’s work that could go on for some time.

That’s good news, says Boswell, because every student ought to have the opportunity to experience what she’s experienced this summer.

“There’s nothing like getting in there and doing something real,” says Boswell. “I’d recommend this to everyone.”

Down in the basement at Bellefield is a good place to do it.