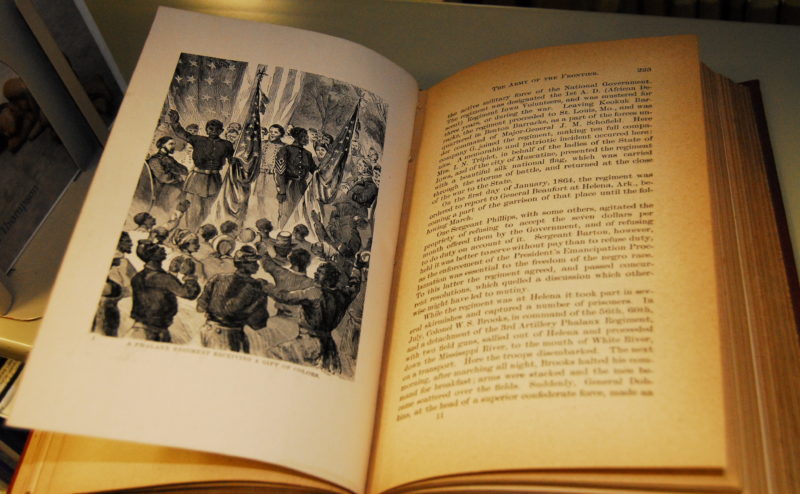 June of 1864 was a time of terrible slaughter in eastern Virginia, where the armies of Ulysses S. Grant and Robert E. Lee locked horns in their famous death struggle at the end of American Civil War. But for African-American soldiers in the Army of Potomac it was, at least in retrospect, a time of triumph, too, as one of those soldiers, Joseph T. Wilson, related some years later in his book The Black Phalanx.

Wrote Wilson, “It had indeed been a bloody June; the soil of Old Dominion, which for two centuries the had tilled and made to yield the choicest products, under a system of cruel and inhuman bondage he know reddened with his blood in defense of his liberty, proving by his patriotism, not only his love of liberty, but his courage and capacity to defend it. The negro troops had marched and fought with the white regiments with equal intrepidity and courage; they were no longer despised by their comrades; they now had recognition as soldiers, and went into the trenches before Petersburg as a part of as grand an army as ever laid siege to a stronghold of stormed a fortification.”

The elation of the African-American soldiers felt at having proved their worth, at being able to stand beside white soldiers in the ranks of the nation’s army, may be lost to 21st Century Americans. But patrons of Francis Marion University’s James A. Rogers Library can sample it for itself. 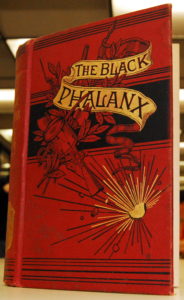 The library now has a copy of The Black Phalanx on its shelves.

And not just any copy either. The worn, but handsome, leather-bound volume at Rogers is a first edition of the work, whose full title is The Black Phalanx: a History of the Negro Soldiers of the United States in the Wars of 1775-1812, 1861-65. The 542-page tome was published in 1888, twenty-three years after Wilson completed his service as a soldier in the famed 54th Massachusetts Volunteers and the 2nd Regiment Louisiana Native Guard Volunteers.

It also makes for an excellent centerpiece for the library’s new African-American collection.

The African-American collection at Rogers is a long-time project for FMU’s Dean of the Library, Joyce Durant, who sees it as a an appropriate resource for a library in the heart of the Pee Dee Region of South Carolina, at a university with a significant African-American enrollment.

“Our challenge is to get some of those rare resources for our library to further research opportunities for our students, faculty, and staff so that we might continue to fulfil our mission of serving the Francis Marion community as well as the Pee Dee region of South Carolina,” Durant says. “As our collection continues to grow, we have identified a couple of sources for original African American Americana and are eagerly anticipating purchases of more original works and rare items. Some titles are even being offered to us as gifts which we gladly accept.”

The collection was funded by a $100,000 U.S. Department of Education grant, plus $50,000 in university funds. Durant credits FMU President Dr. Fred Carter for his strong support of the collection, both in providing resources and offering encouragement and intellectual support.

Durant and company used some of the available funds to purchase Black Phalanx from Cassandra Williams Rush, the owner and operator of the C. Williams Rush Gallery and Museum of African American Art & Culture in Kingstree S.C. Rush is a collector of books, artwork and assorted Americana related to African-Americans.

The collection, unveiled in February, includes some 4,000 titles, 200 DVD titles, an assortment of periodicals and chronologies, four electronic databases and microfilm resources. It contains numerous works by African-American authors, but also about African Americans. Titles in the collection include Aerospace Engineer Aprille Ericsson, Africa is my Home; From the Hood to the Hill: a Story of Overcoming; and Congressman James E. Clyburn’s Blessed Experiences.   Online resources include information on the reporting of civil rights in America, the Rosa and Raymond Parks Institute for Self-Development and Civil Rights movement veterans.

The collection is open to the general public and most items can be checked out with a FMU ID card or a guest borrower’s card.

All print titles in the collection are bound to preserve the book jackets, which makes it distinctive from other collections in the James A. Rogers Library.

Items in the library’s African American Collection have been in circulation for approximately one year and were recently assembled for housing in one place. The book circulation has increased by 30 percent since the February unveiling ceremony, while the circulation of DVD’s has increased at a rate of 46 percent and the loan of laptops at a rate of 51 percent. These numbers are significant for the size of the collection, says Durant.

“So it appears we have circulated a third of the books and nearly half the number of DVDs and laptops (for this year) in total during the first 11 days of the month (February) alone,” says Durant. “Although our students are the major borrowers, it made me feel good to learn that custodial staff (and staff) from other areas borrow books from the collection.”

For additional information about the Library’s collection, visit libguides.fmarion.edu/aac2