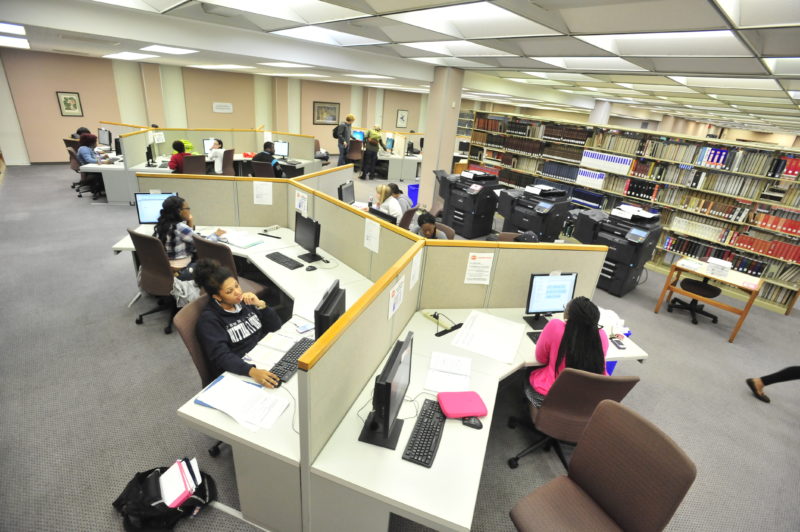 FMU’s Rogers Library is turning the page on a bold new future, one phase at a time

Who even remembers the old card catalog system?

Once, it was a staple for library collections worldwide. Today it is a relic, replaced by a handy online version that offers all the organizational power of the old system without the thumb-numbing workout required to use it.

These days, the card catalog filing cabinet is just a memory at Francis Marion University’s James A. Rogers Library. Only Rogers’ veterans, like Head Reference Librarian Suzanne Singleton, still remember it and its final days as the library began the transition to a computer-based filing system.

“Once we decided to transition,” recalls Singleton, “we called it a ‘frozen catalog’ because we were no longer adding cards to it. We even had a sign contest among our staff to create the best sign to discourage use of the catalog. (The winning entry) was placed on top of it.”

Such is the way of the library world, says Dean of Rogers Library Joyce Durant. The library no longer serves as a book and material storehouse. Instead, it is the social and information hub of a student’s academic experience. And in the years ahead, Durant says she expects the tempo of that change to do nothing but accelerate.

Consequently, both planning and actual work on the Rogers Library of the future is already underway.

“Our vision ran out,” says Durant. “We needed (a plan for the library) that would include the latest technological offerings, while better utilizing the space we already have.”

Several years ago, FMU hired McMillan Pazdan Smith Architecture to develop a master plan for the library that would address current trends, better utilize existing space and prepare the library to the changing needs of the students. After extensive interviews with school administrators and staff, the firm developed project goals that would eventually serve as the library’s master plan.

A number of goals and principles came out of those interviews and the firm’s initial study. They included reducing the size of the print collection in order to dedicate space for a computer lab/ classroom for the library’s growing African American Collection and individual and small group study rooms. Plans were also developed for renovating the first level of the Reames wing to accommodate Special Collections and Archives.

The renovation work currently awaits funding, as do some other portions of the plan. Durant and company knew all along that the re-tooling would have to be done in phases. But some parts were put in place almost immediately, says Durant.

“We immediately began to discard print materials where we had permanent access to the electronic,” says Durant. “We also brought in new furnishings, like bean bag chairs and dry erase boards that would meet our patrons’ changing needs.”

A big part of the re-design involves the integration of the e-book collection, an initiative led by Singleton. She says the library has long held an e-book collection, but that as technology has become more pervasive in society, its adoption by users of both the FMU library, and libraries everywhere, has gained momentum.

Nathan Flowers, systems librarian for Rogers Library has worked to ensure the e-books are listed in the catalog alongside the bound books, giving them optimal exposure to students and others who utilize the library. For that reason, Singleton says the library hasn’t really advertised what is actually a rather dramatic move to e-library status.

“We haven’t done any traditional marketing because when a student searches for a book, typically the e-book version comes up along with all the others,” says Singleton. “They are often given that option. Since they are seeing more of them, it isn’t strange to them.”

The library has access to more than 300,000 e-books on myriad subjects. The number of “e-volumes” changes all the time because e-books are purchased as a package and the library is constantly adding new and dropping old titles, says Flowers. Though studies still show that students prefer print books, students are finding that it’s increasingly important to gain access to e-resources. It expands options, both in terms of total offerings, and those that may better fit students’ schedules — e-books, and e-listings are available when the library is closed. They’re also available to students taking online courses, a growing feature of academic life at FMU.

The library provides network entry for most e-books offered at Rogers, which gives authorized users access around the clock. A book can be easily downloaded to a variety of devices.

What most don’t see is the behind-the-scenes work that brings e-books to users. Not all books can be downloaded to these devices in their entirety. The system might allow for one chapter at a time to be downloaded or the entire book. In some instances, once given access and downloaded, the document can disappear after use. That’s the e-quivalent of bringing a book back on the return date.

The life of an e-book is speedier, too.

When a library decides to add a printed book to collections, it is purchased, cataloged, processed and then put into circulation.The path for e-books is shorter. Both the acquisition phase and the “download” happen sooner, often with just the touch of a few buttons.

Rogers Library, like most e-libraries, chooses to purchase its e-books from publishers, aggregators and subscription vendors who all play by a different set of rules. That is the most complicated part, says Flowers. But, the library is working through those issues.

Integrating an e-book system has paid an additional dividend by helping library staff with the “weeding” process surrounding legacy print volumes. That’s a continuous process involving the examination of the Library’s collection to determine which materials are obsolete, duplicated, worn or no longer serve its mission, says Durant. Volumes available as e-books no longer have to be replaced when worn.

“There will always be a place for the bound book as long as there are historians and others who simply prefer the feel of books,” says Durant, “but the e-books have given us a means by which to forge our efforts to operate more efficiently.”

Rogers Library currently has 294,000 print volumes, down from 296,000 last year. This is mostly due to weeding, especially in government documents and periodical collections, says Flowers.

All state libraries use a company that sells the books and collections after the purging of a collection. The money from the sale is used to purchase more books — which today often means e-books.

On to the future

Phase I of the library’s modernization includes weeding bound periodicals, integrating the e-book system and addressing space issues ahead of renovation work planned for phases II and III. The overall plan addresses the needs, examines the utilization of existing space and makes recommendations that utilize the space’s highest and best purpose for the future.

It’s a fitting exercise for a building that will turn 45 this year. The first part of Rogers Library was dedicated in 1971. At that time, the first floor included library services while the second floor contained classrooms and faculty offices. The J. Mitchell Reames Wing was added in 1988. The Reames Wing added 23,000-square-feet to the existing 54,000-square-foot facility. The library’s collection filled the first and second floors of both. It continues to occupy this space today.

Phase II calls for the renovation of the entire first level of Rogers Library, while Phase III involves the renovation of additional areas in the Reames wing. In this phase, special collections and archives will be moved to the first floor to provide study and meeting space on the second floor. The plan also calls for the creation of a new computer lab on the first floor and staff workroom.

“We’ve made changes in our staffing and in the relevancy of our collections which are sure to yield some gains for us,” says Durant. “We will take our time and make changes as we are able in order to continue to serve as a gateway to knowledge and information for the Francis Marion community.”