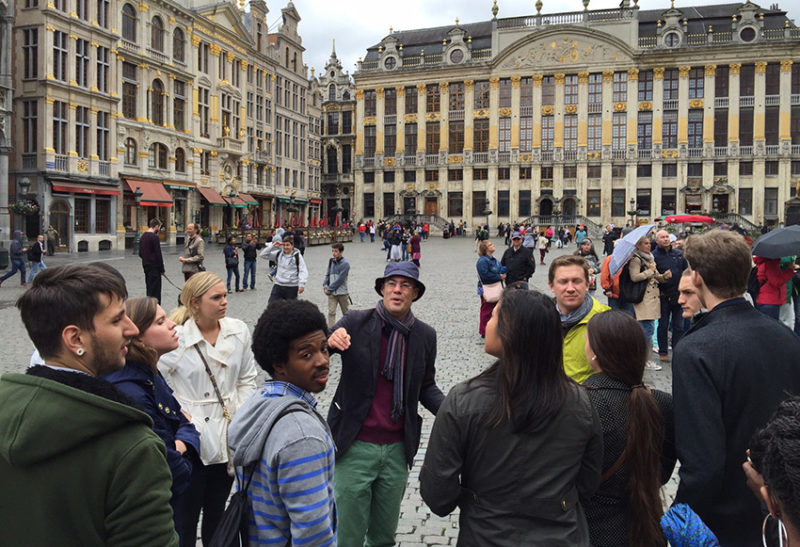 Where can you find one of the world’s leading experts on the massive (751 member) European Union Parliament?

The one in South Carolina.

That’s the home of Dr. Will Daniel, an assistant professor in the Francis Marion University Department of Political Science. Early in his academic career Daniel has already carved out a place for himself in that particular niche of academic inquiry with the publication of his first book, Career Behavior and the European Parliament (Oxford University Press, 2015).

The volume, an extension of Daniel’s doctoral dissertation, is based on exhaustive research into the backgrounds of members of the EP, as well as recent interviews with more than 50 members of Parliament. It is a significant work in the field because it catalogs the backgrounds and careers of some 4,500 legislators, from 28 different countries, who filled EP seats from 1979-2014.

Using the database created for Career Behavior, Daniel also brings new observations about the EP to light. As time has passed, Daniel asserts, EP members have viewed the 28-nation legislative body as more of a career destination and less as a political stepping stone. But, that view varies from place to place. Germans see it as more of a career, the French still view it as a rung on the ladder … and so on.

The conclusions and theories are important, but even Daniel admits that the book’s considerable research component may be its primary gift to the scholarly field.

“It is, in itself, a major contribution,” says Daniel.

Daniel toiled in various European archives to compile data on every EP representative in the body’s history. His interest in the topic began in college where Daniel, a French major, took time to tour the continent. That meshed with a long-held interest in politics and voila, a multi-lingual parliamentary scholar was born.

The book will be of obvious interest to European political scholars, hence the interest of the prestigious Oxford Press in publishing the work.

Of more interest, perhaps, to budding scholars at Francis Marion is the innovative new course type spawned by Daniel’s interest in euro-politics.

Acting on a suggestion from Dr. Mark Blackwell, director of FMU’s International Studies Program, and with encouragement from FMU President Dr. Fred Carter, Daniel created and implemented a new course this spring called “European Integration.” Ten students from a variety of departments enrolled, studied EU and EP politics with Daniel, then capped their experience with a spring trip to Europe that included stops in all the EU “capitals” – Brussels, Belgium, Luxembourg and Strasbourg, France.

Various trip logistics and on-the-ground instruction were fostered through an academic partnership with the European Academy at Otzenhausen, located in Saarland, Germany. FMU’s Carter has had a long relationship with EAO.

“What we came up with,” says Daniel, “is about the most ideal situation that I can think of for any undergraduate: to study abroad in a highly structured way that not only taught them a lot about a subject of interest, but also allowed them to observe the subject matter ‘in action’ over the course of a surprisingly affordable 10-day trip.”

Daniel calls the entire adventure, from book to course to trip, a “wonderful experience. The students involved were a big part of that.

“We selected a fantastic and diverse group of FMU students, from across a number of different majors and backgrounds,” says Daniel. “Most had never traveled abroad and a few had never been on an airplane. I was truly impressed by how easily they adapted to their surroundings, as well as how professional they were on the trip—showing up on time, engaging our guest speakers and guides with intelligent questions, and applying what they observed to their course studies. It was incredibly gratifying to me as an educator to watch the students take in their surroundings and process it all within the context of the course. It also left me convinced that this is a model for travel study that must continue to be repeated.”

Discussions are underway on building another course. The EAO is interested, and some of its other specialties – business, sustainability – suggest possibilities for a number of FMU disciplines.