Team IMPACT, a non-profit group that pairs children who have chronic, life-threatening illnesses with collegiate sports teams, can make a difference in a child’s life.

A real difference in the life of a collegiate athlete, too, as it turns out.

Members of Francis Marion University’s men’s and women’s soccer teams have learned this first hand. FMU has been a part of Team IMPACT since 2014 and has “drafted” two local kids, Paisley Butler and Maddox Daniel, onto its program.

Being drafted by FMU meant that Maddox and Paisley became part of those respective teams (men’s soccer for Maddox, women’s for Paisley). Maddox and Paisley were drafted at a special ceremony, received their very own Patriot gear and then began attending practices and games as often as they could.

And that’s where lives began to change.

“A little girl might not live (past the age of) 10, so it helps you think about everything you’re going through and how it’s so little compared to what that little girl is facing,” Finney says. “I think (Paisley) has helped a lot of people on our team grow, especially me, in recognizing that there’s something more out there, and even when you have a bad day, there’s so much more to be appreciative of and so many reasons to be happy.”

Men’s soccer team member Harrison Smith, a sophomore from Hartepool, England, says spending time with Maddox has helped him deal with the loneliness of being far away from his family.

“Being away from my family means it can be at times a lonely and sometimes sad place to be,” says Smith. “However, when we got the chance to meet with Maddox and the Daniels (family) and make a difference, it takes away any sadness and brings joy and pride.”

“Every time we can do something that can even make Maddox smile is more than worth its weight in gold,” says Smith. “(Meeting Maddox) will be one of my biggest and happiest memories of men’s soccer at FMU.”

Getting to know a new “teammate” isn’t a one-time deal. In the case of both Maddox and Paisley, establishing relationships was something of a campaign.

The women’s soccer team prepared a basket of dolls, soccer balls and an assortment of purple items (Paisley’s favorite color) for Paisley on her Draft Day.

Paisley liked the gifts, and not surprisingly, she was shy at first and didn’t talk much with the players.

But as team members spent time with her, Paisley began to show off her sweet personality by playing soccer, coloring and exchanging high-fives with her new found friends.

Finney says this was her first and favorite memory with Paisley because their special connection had just begun.

Harrison said that his best memory with Maddox was the one-year anniversary surprise party the team threw for Maddox.

“It allowed us to show just how important he and his family were to our program and how much we loved having him as part of our soccer family,” Smith says.

FMU Women’s Soccer Coach Lindsey Morgan says, “(Paisley) has really opened up the girls’ eyes. I have seen them grow and be more interactive, getting outside their comfort zone. Not only are they helping Paisley, but she is impacting their lives 10 times more than they even know.”

Maddox suffers from Duchenne Muscular Dystrophy, a condition that causes progressive muscular degeneration. Paisley has been diagnosed with Sanfilippo Syndrome, which is a condition that affects a cell’s ability to recycle waste.

The Butler’s family met the Daniels at church in Florence and learned about Team IMPACT there. It was a natural fit for a family populated by coaches and other children who play a variety of sports, says Leighann Butler. 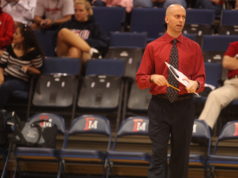 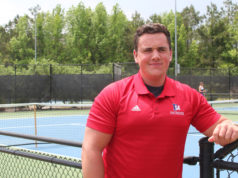