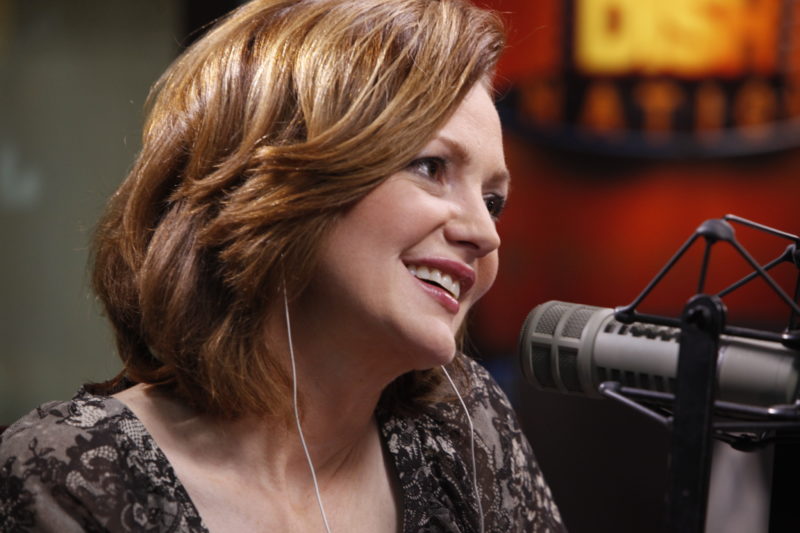 Kellie Rasberry (’93) is entering her 24th year as an on-air radio personality on The Kidd Kraddick Morning Show. The show is broadcast from Irving, Texas, outside of Dallas, but is syndicated nationally in more than 70 markets. Rasberry lives in Dallas with her 10-year-old daughter Emma Kelly. While back in her hometown of Florence last year during a promotional tour, Rasberry sat down for an interview with the VIEW magazine. Here’s what Kellie had to say about her unusual career – and the start she received at FMU. The interview has been edited for clarity and length.

The VIEW: As I understand your career, you started off wanting to be in modeling, showbiz?

Kellie Rasberry: “I wanted to be a Sitcom actress. That was my real dream. I loved Sitcoms. I grew up with Happy Days and Three’s Company and all. That was what I really wanted to do. … There really weren’t a lot of avenues for that in Florence, SC, so I went to the Valdotti School of Modeling, which I looked up in the Yellow Pages for acting classes. … (The owners) had an acting convention, a modeling convention actually, in Myrtle Beach where they’d invite agents and whoever from Atlanta to come and see you. At one of those I met the owner of a radio station from, I believe, Cheraw. He said, “I think you’ve got a great personality for radio, so you should call my friend Harold Miller WJMX (in Florence) and tell him I said you ought to be on the radio.

“Well, I was 19 and didn’t know any better, so I called and said ‘I need to come see you because I should be in radio. This man told me I should. …. They actually let me come in. They sat me in front of this big tape recorder, one of those old reel-to-reel jobs, and said just starting talking. It ran for 30 minutes. I just started talking. I didn’t know what to do but I could talk. Never a problem … So they hired me to come and sit in with the morning show man who was Bob Boswell at the time. …. If they used me, they paid me – minimum wage. Every now and then I’d get a check for $10 or so. But I was there every day with my box of donuts, and then eventually the news girl quit and I got that job. And that’s how my radio career started.

VIEW: And you ended up on Kidd Kraddick in much the same way – some one else told you to go.

Rasberry: “I eventually got a job on the morning show at Sunny 102.9 (which no longer exists), was doing that by myself. A friend at WJMX who read the trade papers all the time, saw the ad for Dallas (where Kidd Kraddick was in the process of building an on-air team for his new show) and he said ‘if you don’t apply for it, I’m going to send in a tape behind your back. …’ That was almost 23 years ago.”

VIEW: The show has been successful, but … what exactly do you do?

Rasberry: “We are on in 70 markets and we just signed a new five-year deal, so it’s going well, despite the fact that Kidd passed away (Kraddick died of sudden heart attack in 2013). Most of the affiliates gave us a chance when Kidd died. Apparently we still had something. …

“There’s not really much research involved with what I do. I have to know a little about a lot. So my job is to know what are the most popular TV shows, who’s the most popular artist. … We try avoid politics because every time we do that we do something stupid. And Geography. We’re the worst at that. I have to be able to live my life and share my opinion. … One of our regular features is ‘Love Letters to Kellie’ every Wednesday. I read those, to I have to able to read … My job is to try to be entertaining and try to know what I’m talking about. Sometimes people call to say they’ll never listen again because of me and sometimes they say I’m the only reason the listen.”

VIEW: At some point your gig on the show became fairly lucrative, but do you find this to be satisfying, enjoyable, in other ways?

Rasberry: “I love it. I get to show up and talk about anything I want to talk about for four hours a day. It’s heaven. I’m thankful for the people who work in the cubicles and dig the ditches. They make this country go. At the end of my day, I’m not wiping my brow. I just talk for a living. It’s a blessed career. I’m very lucky to do what I do. If we can make everyone else a little entertained during the day, well that’s a good thing.”

Rasberry: “One of great things about radio is you get to pick a fake radio name. You don’t really think some mother named her son Cadillac Jack do you? Well, they do I guess, but that’s not how it works. It’s a fake name. I was so excited (when I got the job on Kidd Kraddick). I was trying all these things. My boss said, ‘why? Your name already sounds fake.’ That’s true. But I can’t hide. When I go to the store and the see the name on the card, or the check, ‘are you her?’

VIEW: So, about that education. You went to more than one college. It didn’t seem to be quite the thing for you, at least not at first.

Rasberry: “I graduated from Florence Christian. I had a scholarship to Liberty University. It was only a one-year scholarship. When that ran out I went home. I really didn’t know what I wanted to do.”

VIEW: There was this showbiz idea …

Rasberry: “Right, there was that. Educationally, I wanted to be an actress and I had this job in radio. I didn’t really know what to do for an education. … I did promise my mother I would finish college, though.

“I was doing morning radio, dad had western wear business (Go West in Florence) that I was working at some and was doing weekend weather at TV Channel 13. So I enrolled at Francis Marion as an English major with a minor in Mass Communications. I mean, I was already communicating to the masses so why major in that? FMU was a good school and I could go there and keep doing the other things.”

Rasberry: “I did the morning show, then went right to Francis Marion, then I went to my father’s store after school and worked there. And on the weekends I did the weather. It was busy. I got my first gray hairs doing that.”

Rasberry: “Oh, I was a full-time student. I did both semesters as much as I could. I did the Maymester, I did both sessions in the summer. My goal was to get it done. I didn’t do the sorority thing – well, I was a little older. I was different. I was dressed for work. They were in their sweats or their shorts, or maybe their pajamas. So I didn’t really get involved in social scene … well, I did go to a frat party eventually. December of 1993 I graduated. In 1994 I moved to Dallas.”

VIEW: You had enough of a career that maybe you didn’t need this to help you figure that out. Or did you? What did you get out of college?

Rasberry: “Well I really didn’t know where I was going so I wanted something versatile. Maybe I’d teach. … One semester I interned in p.r. at McLeod Hospital. English was versatile … plus I loved English. I’m that weird kid who loves grammar. I actually enjoyed diagramming sentences – which is becoming a lost art. I loved reading books …”

Rasberry: “Oh, I’m still like, when I’m readying, ‘oh I can’t believe they missed this.’ I love proofreading! I loved literature, too. One of my favorite courses at FMU was Southern Literature. I fell in love with Southern authors. And then we had one teacher – she had red curly hair, and was a Shakespeare nut — . She taught me to appreciate Shakespeare. … I’ll say this, the teachers at FMU, especially in Literature, I found to be very passionate. Those are the classes I remember the most.

VIEW: What does the future look like for you?

Rasberry: Like I said, we just signed another five-year deal, so we’re set there. For awhile. Of course, I’m getting up there. …. When Kidd interviewed me for the job in the first place, one of the things he asked was ‘where do you see yourself in 5-10 years.’ My answer is pretty much the same today as then. I don’t have a plan. I roll with what happens. I guess I’ve rolled in the right direction. It’s been surprisingly simple. I’ve just been myself.”