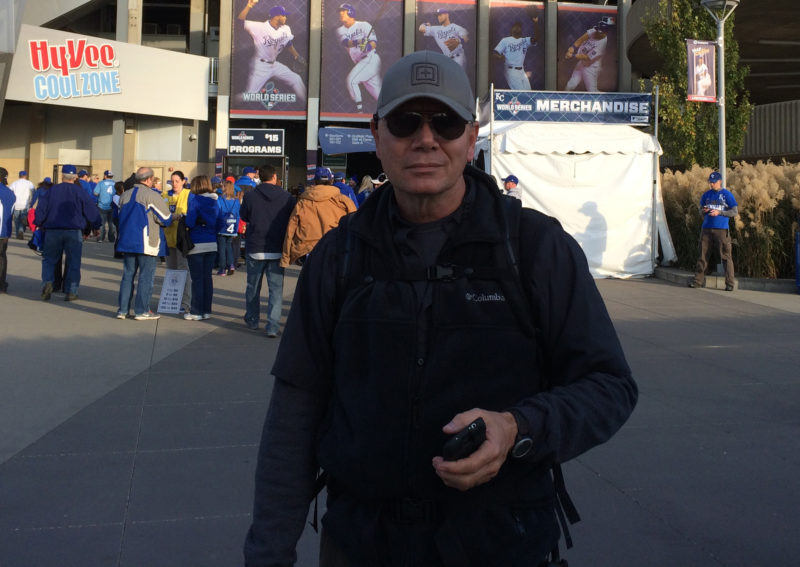 Working with the world’s fastest supercomputers, supervising research on cutting-edge materials, providing security for the World Series and the Pope – it all seems like a dream or maybe a chapter from a Tom Clancy novel.

For Francis Marion graduate Dale Perkins, it’s just another day at the office.

Perkins, a 1989 health physics graduate, is a radiological assistance program and nuclear emergency support team captain at the venerable Oak Ridge National Laboratory in Oak Ridge, Tenn. where he interacts daily with some of the most advanced technology in the world. The skills and capabilities that Perkins’ team possesses led to some interesting assignments – interesting to the outsider anyway.

Perkins and the Oak Ridge boys provide security in conjunction for the FBI and Secret Service for major events, terrorism threat reduction and global nuclear non-proliferation. Recent assignments include the 2015 World Series in Kansas City and New York City, and Pope Francis’ recent visit to the United States in last September. Perkins and his team provided overnight security at the Vatican Embassy in Washington, D.C. and along the papal parade route in Philadelphia.

“People get really excited hearing about that,” Perkins says. “They’ll say, ‘Oh, wow! That must be cool.’ It really is, but it’s also a lot of long hours.”

Perkins says the majority of what he does involves administrative tasks at the Oak Ridge facility. He and his team are focused primarily on technologies and projects that involve working with radioactive material.

“The bulk of what I do is review and approve all research activities that involve radioactive or nuclear materials for five research divisions,” Perkins says. “We’re working on developing the next generation of carbon fiber, along with nuclear forensics, additive manufacturing, environment sciences among other things.”

Most interesting to Perkins than tagging along with the Pope is working on the cutting edge of technology, including regular sessions with the world’s fastest supercomputer. Or, some days, the second-fastest.

Working on the scale of thousands of petaflops (a supercomputer measurement for calculations per second), the U.S. Department of Energy’s Oak Ridge-based Cray XT Jaguar, Titan Cray XK7 and the Gaea supercomputers articulate some of the most complex calculations known to science.

Perkins had no idea he was headed towards a world of Popes and petaflops back in the 1980s. In fact, he wasn’t sure where he was headed. The Florida native had graduated from the University of Central Florida in 1981 with a degree in radiation protection technology and worked in a variety of jobs within the field of health physics, but his career in radiation protection had hit a ceiling.

At his latest job before beginning his second educational career, Perkins had just hired two recent graduates of the newly founded health physics program at Francis Marion University, the program pioneered in the late 1980s by professor Lynn D. “Skip” Hendrick. The FMU grads were impressive and Perkins had developed a long distance association with Hendrick. So he took a recruiting visit to the campus of Francis Marion.

“I remembered Francis Marion and I remembered Skip,” says Perkins. “I drove up and did a visit with the college and decided I liked it. The program was physics-based, so I left Florida and went to Francis Marion. I never looked back.”

Perkins was one of the first – maybe the first – health physics student at FMU to come to the program with real world experience. That should have given Perkins a leg up and, in truth it probably did, although not in exactly the way that might be imagined.

Perkins found the rigorous curriculum at FMU to be a challenge, and after managing his freshman year without too much difficulty, found his performance falling off his second year. He was mired in a “sophomore slump” that didn’t go unnoticed by his professors.

Perkins was called into Hendrick’s office where he was “inspired” to pick up the pace.

“He (Hendrick) said, ‘Perkins. You’re too old to have a sophomore slump. You need to get off your @#$@#$(* and go to work,’” Perkins says. “You don’t get that at a big university. I went there and learned… They took an interest in me and they taught me.”

Perkins was classmates and friends with current FMU Professor of Physics Dr. Phillip Fulmer. They formed a great bond and a lifelong friendship was born.

Fulmer says Perkins’ success is not a surprise – nor an outlier.

“Dale and I are not unique among the graduates of the health physics program at FMU,” Fulmer says. “There have been plenty of others who have graduated from the program and have distinguished themselves in the workplace. In fact, it is a general rule that our FMU health physics graduates become leaders in their careers.”

After graduating from FMU in 1989, Perkins went on to work at the Savannah River Site where he oversaw a number of extensive upgrades and a restart of the facility’s moderated production reactor. A few years later, Perkins found his true calling when he moved to his current home in Oak Ridge and began working for the Oak Ridge National Laboratory.

Since then, it’s just been one amazing project after another with a little bit of mountain biking sprinkled in-between.

“The mountain biking,” Perkins says, “is much better in East Tennessee.”

Perkins says his time at Francis Marion was instrumental in putting him in his current position.

The accountability provided by the university gave Perkins the necessary initiative to propel his career to the top of his field.

“As a veteran of a number of universities, Francis Marion offers the absolute very best education I ever got,” Perkins said. “You actually get instructors that are interested. They know and care if you’re not living up to your potential.”