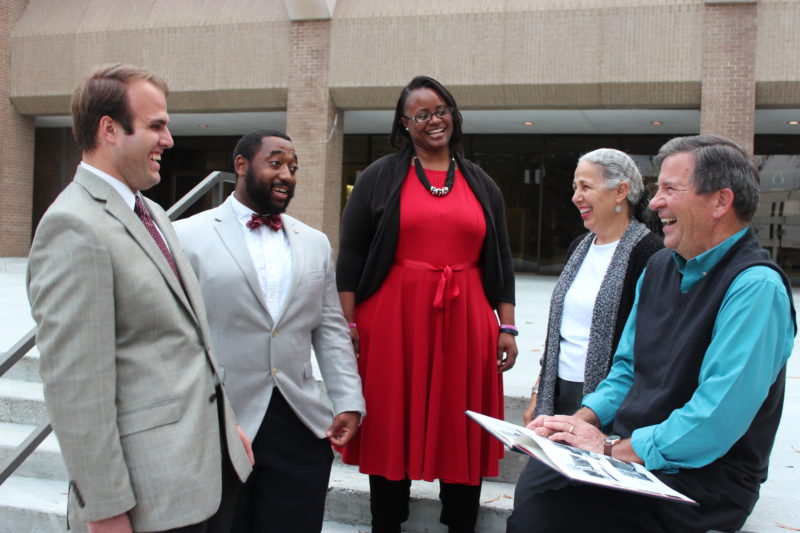 Student government, that is. It’s not always glamorous, but for FMU’s student leaders, it’s been worthwhile

The year before Stacey Brayboy was elected vice president of the Francis Marion University student body, her brother was shot to death in a tragic incident that weighed heavily on her young mind. So, one of the first things Brayboy did upon assuming office was to introduce a bill calling for increased consequences for students caught in possession of firearms — including BB guns — while on campus.

The bill generated some smoke, but ultimately, no actual fire. Then-FMU President Dr. Thomas C. Stanton did not approve Brayboy’s bill. The university’s existing housing regulations, reasoned Stanton, were already more stringent than those proposed in the student legislation. But, Stanton told Brayboy, he fully supported its sentiment. She was right to champion an important cause, if not exactly on target with this particular bill.

It was a great lesson for Brayboy, one she still remembers today: you can win even if you don’t get what you ask for.

For Francis Marion students past and present who have toiled away in the university’s Student Government Association (SGA), devoting countless hours to issues and tasks that didn’t always capture the imagination or interest of their classmates, the enduring memory is of small triumphs just like that. Student government doesn’t run a university, but it does have influence. It can make a difference.

Mary Kay Belissary, the first woman elected SGA President at FMU, says SGA work is not about one bright comet in the sky but is, instead, about hundreds of little stars. Most SGA officers from across FMU’s 45-year history would agree. They ran, they served, and they made campus life just a little better along the way.

An important role for the SGA developed right from the beginning at Francis Marion. Calvin Benton (’72, ’77), the school’s first student body president, recalls the thrill of meeting regularly with President Doug Smith and helping create some of the university’s most basic structures.

“We (SGA) met on a weekly or monthly basis talking about affairs related to the school and I met with Dr. Smith weekly,” says Benton. “He was interested in student government. You had to take time to meet and decide what needed to be done and implement it, but it was worth it.”

Among the tasks that Benton and company labored over was creating a constitution that laid the responsibilities and rights of the SGA itself. He realized then the importance of creating a proper framework for future SGAs.

“It’s what I enjoyed doing,” says Benton. “I enjoy the process of being involved in the lives of people wherever I am. I was challenged by doing what I could to make things better.”

As the years progressed and the university became more established, SGA leaders began to take on other causes. Most dealt with niches of university life and didn’t make big impacts. But like Belissary said, it takes a lot of stars to make a beautiful night time sky.

The SGA is responsible for a number of routine tasks, from allocating funds to student organizations to lobbying for improved classroom chairs to seeking tweaks in campus regulations. Much of the SGA workload is mundane, but the variety is always entertaining.

Darlene Granada, an SGA vice president in the late 1990s, introduced a plan calling for a reduced price meal-plan for students living on campus in late Spring and Summer I and II sessions, and another one asking to extend lunch hours at the university dining hall by 30 minutes. SGA President Anthony Odom (1996) authored a resolution — it passed — awarding small scholarships to executive officers each semester as a small reward for their service. (Note: the SGA scholarship program ended some time ago.)

Latasha Brand, who served back-to-back terms as SGA president in 2000-02, steamrolled the opposition with an initiative to remove annoying speed bumps from some campus roadways. Cody Simpson, another two-termer (2011-13), took on student involvement when he waged a (successful) campaign to re-start the annual homecoming parade. Current SGA president Sam Smoot has championed a number of causes, including student engagement in general, and in particular with regard to FMU’s legion of commuter students.

Again, nothing earth shattering there, just a lot of small, quiet actions that, over time, make a big difference.

Lesson in a cabin

And sometimes the actions aren’t so quiet.

While serving as SGA vice president during the 1993-94 school year, Stacey Brayboy introduced her gun control legislation and also led a petition drive regarding the placement of Hewn Timber Cabins — historical buildings from the days when the land that makes up the current FMU property was a working plantation, complete with slaves — on (or not on) campus.

Brayboy used the SGA bully pulpit, as well as a dose of her own moxie, to organize a demonstration to have the Hewn Timber Cabins removed from campus. That ultimately led to a face-to-face meeting involving the SGA, the FMU administration, and members of the family that donated the land and who were interested in preservation of the 100-plus year-old buildings.

That meeting, says Brayboy, led to a better understanding and appreciation for the cabins, which in turn resulted in the withdrawal of the petition.

“It took us coming to the table and working through both sides collaboratively,” Brayboy says.

It was a valuable lesson in diplomacy for Brayboy, who has worked in government for most her post-FMU career. She served as a member of President Obama’s transition team beginning in 2008, and is currently chief of staff for the U.S. Department of Agriculture’s Food Nutrition Services.

Brayboy was something of a natural of SGA work. She’d been interested in the political process as early as middle school.

“In middle school, I had a natural curiosity about student government and serving as a class representative,” Brayboy says. “My first dream was to be an astronaut and after Physics II, I decided my second love would become my first, government and public service.”

Brayboy was elected student body president in high school, then was elected the VP role at FMU.

Likewise, Belissary seemed destined to lead an SGA life at FMU. After all, she’d been a leader in student government and had earned an appointment to a prestigious internship in the office of legendary U.S. Senator Strom Thurmond.

At FMU, Belissary won the race for secretary-treasurer her sophomore year, setting up — in her mind — a challenge to presidency, a males-only bastion at FMU up to that point.

But, in her first attempt, she lost.

The budding student politician was crushed, but, as so often happens, out of defeat came victory.

“What I thought was the biggest failure of my 20-year-old life actually proved to be the best thing that ever happened to me,” says Belissary. “I had assumed I would help people through government, as I had been involved in student government since high school and had been privileged to participate in the internship (with Sen.Thurmond). But the loss of that election, it made me look at what motivated me to love student government and that was the fact that I loved serving people.”

Belissary’s post-defeat soul searching actually led to a career as a physical therapist, an occupation where she serves people regularly, and which she has enjoyed for more than 30 years.

Just like she enjoyed beating the boys and winning the presidential election the next year.

For others, stepping into a leadership role is less obvious. Brand was encouraged to run for an open vice president’s position by faculty and staff members, then found herself president by default when the officer winner couldn’t fulfill his term. With no experience in student government, much less the presidency, Brand wanted to bail. But she couldn’t get out.

No problem. She rolled up her sleeves, learned the process, got rid of some speed bumps (along with accomplishing one or two other things) and wound up serving two terms.

They actually heard us!

SGA work may involve a lot of behind-the-scenes stuff aimed at making incremental progress. But every now and then an “ah-ha” moment does arrive.

Simpson (‘13) recalls putting together an important, but admittedly, somewhat innocuous proposal together to re-launch the homecoming parade. It wouldn’t really create sea change, but it would add to building momentum that was making FMU a livelier place.

“It was time for students to step up,” says Simpson. “We decided that what would be best is that we bring a tradition of something that was here years ago. That was the Homecoming Parade.”

Seemed simple enough, but when Simpson and company called a meeting to discuss their plans, students and student leaders turned out in record numbers. Like a SGA Donald Trump, Simpson had struck a nerve.

“(The response) was huge,” says Simpson. “We had to bring extra chairs in to the room. (We were) overwhelmed that so much support came out of that.”

Similarly, Brand, the reluctant president, wasn’t expecting to get far with her speed bump proposal. It might cost money and, as she discovered while researching the idea, it was an earlier SGA that asked for the bumps in the first place.

“I did my homework, though,” says Brand, “and it turned out that there were so many (speed bumps) that it began to damage some folks alignment.”

She approached the university administration to see what could be done to have them eliminated, or, barring that, reduced. The request was made in the fall and the changes were implemented … the next spring.

Brand remembers thinking, “wow, they heard us. This is awesome.”

Brand had been bitten by the student government bug and she was hooked.

Not the first case at Francis Marion, and not the last, either. 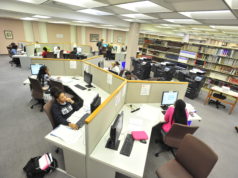 Putting the ‘e’ in library