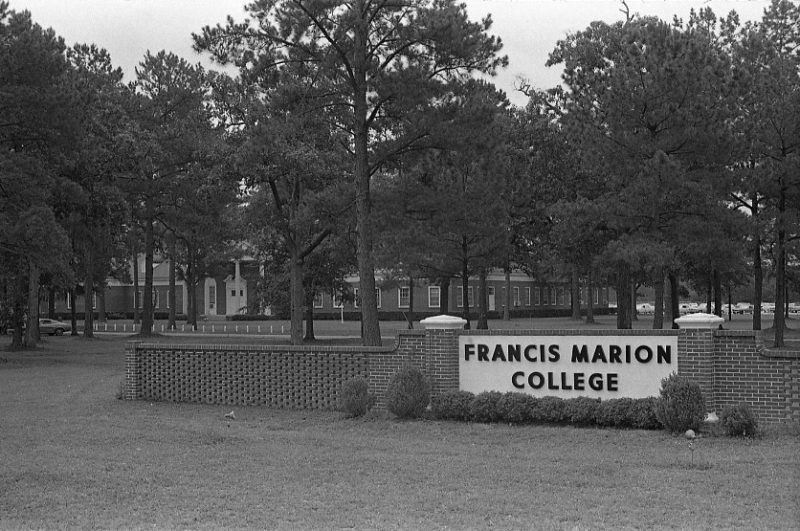 The VIEW asked some of the college’s old-timers to reflect on their memories of the place, the people and the activities as FMU looks back on 45 years

“We had a junk band, a spirit band is what it was (for basketball games and other events). It was me, Curt Boswell, Frank Elmore, Dean Fowler and a few others. We had pots and pans we’d beat on and whistles we’d blow. We got so loud at one of the games, the referee asked us to stop. At each time out, intermission or quarter breaks, we, made a lot of noise. I think we are the ones who started Patriot Week, the official kickoff to the fall semester. And Francis Marion is a family affair. My wife Pauline and I met at Francis Marion. All three of my children attended Francis Marion and I hope my two-and-a-half-year-old granddaughter goes there, too.”

A lesson from Dr. Coker

“There were quite a few professors who impacted my life greatly. There was Don Kelley, and Everett Myers but none quite like Dr. Morgan Coker. At one time I was having trouble in my accounting class with Dr. Coker. I went to talk to him and he really hurt my feelings but what he said stuck with me all of my life. He said, ‘You can be an “A” student if you want to, if you would leave some of your habits alone and manage your time better.’ I did begin to manage my life a little better and am grateful to him for that advice. I became a lifelong learner and I always took enrichment courses for my job. I am now a barber and those skills have been useful in helping me manage my business.”

“Francis Marion had a totally friendly atmosphere back then. The friends I made there are friends for life. I met (Ruth) my wife there. The good Lord meant for me to be there to find her. The faculty and staff seemed to care about students and each other. They were one big family. Everybody knew everybody since it was so small.”

“There was a program offered by the school where I was working, where aides or assistants could go to school (to be teachers). There was a group of us who basically went with the crowd. We commuted from work over to Francis Marion. I had two or three classes in the evenings. It really worked for those of us, many of us, who held full-time jobs. The school seemed to cater to our needs quite well. The campus didn’t look like what it is now. There were basically two buildings and a much smaller parking lot. There were lots of fields.”

“We moved here in 1968, and I graduated from McClenaghan High School. I was looking at taking a couple of years of general course work because my mother was very sick at the time and I wanted to stay at home. I also knew I wanted to teach. Francis Marion was affordable, especially if you lived in the area. There were no dorms at the times, so for most of us, you could stay at home and hold a job. It was not a long distance to drive from my house on Second Loop Road, so I’d have a chance to rest before going to my classes. I worked for the local theatres before they got all these others we have now. They were one of the places that would work around your school schedule. Although I didn’t have a lot of time to spare, I did find time to play a little tennis.”

“At that time Francis Marion was a commuter type situation. People were impressed with the quality of the faculty, small classes and the individual attention by the professors. I worked at the theatres in Florence so I didn’t have much time for extracurricular activities. I also worked for the school district as a teacher’s assistant at Wallace Gregg Elementary School. We were able to work out a schedule where I could attend classes and be over there. That’s how I realized I wanted to be in education. I was married at the time and had a daughter born in 1971. I did play tennis and work in student government. I was also a part of the college choir.”

“I really didn’t know what I wanted to to do when I finished school and I ran into Marvin Lynch one day and he was at the USC-Florence. He kept telling me what a wonderful school it was and really encouraged me to try it. I said ‘why not’ and obviously fell in love with it. When I came out there Marvin Lynch was the basketball coach and guidance counselor, and he introduced me to President Sid Varney the president of USC-Florence. Right from the very beginning, I was fortunate enough to meet two very influential people. When president Walter D. Smith came I was on all the committees. He asked me if I would like to be the student spokesperson for the media, and I also worked on campus as the student assistant to two different professors. So whenever somebody from the Charleston Post & Courier came to town or WBTW came to campus, I offered to do (the interview). I ended up being the person that was sent to the radio (whenever there were newsworthy happenings). I believe God knew this plan was there. My experience was tremendous and Dr. Smith was a joy to work with.”

“It was very economical for students to enroll at Francis Marion because they could stay at home and not have housing and food costs. I realized early on that the quality of the education I received at Francis Marion surpassed all that I thought I would get. I often told others, and still do tell prospective students, that they can compete globally with an education from Francis Marion. I tell others that what I got here, I earned. It was not easy. I sometimes had to struggle. Math classes with Dr. Roger Allen were very enlightening. I learned a lot and his teaching style opened my eyes to understanding statistics. My favorite business professors were Dr. Morgan Coker and the late Dr. Donald Kelley. My favorite psychology professor was Dr. Louis Hoff and for philosophy it was Dr. James Von Frank. After a rough first semester, I was able to get serious about my education. These professors’ teaching styles enabled me to learn and to be able to apply my learning in the real world.”

“At the time I was a veteran. I’d spent two years at Hampton Institute in Hampton, Va. and then was drafted during the Vietnam era. I did my time and came back home and decided that at that time, the best thing to do was finish my college education. (I was) single and my parents were here. They actually taught school and had the funeral home then. This is a family business. I had plenty of options. I chose Francis Marion because here again, I moved back home and my parents were getting older. (It was) the logical thing for me to do. I am the youngest sibling of three and the only male. I made that choice. My siblings had moved away. Most people didn’t want to go there at the time. Francis Marion didn’t have a large minority population at that time. There were only about 33 of us and not all full-time. Any of us that did graduate made a living and contributed to society. If they graduated, they’ve done that. It was definitely a plus. I don’t think we can say anything else no matter how you may have felt at the time.”

There was no real hangout spot (on campus) but we did have Zorba’s where Patriot’s Place is now. J.P. Costas owned it. Groups would come in like the Tam’s and Archie Bell & The Drells. We could go there and get hamburgers and hotdogs. We’d have study groups fraternity friends and life was good.”

A school of hard lessons

“I ended up at Francis Marion because when I finished high school, I didn’t want to go directly into the workforce because (jobs were) so slim. I looked around at the different opportunities and Francis Marion appeared to have been the best choice for me, in terms of living at home and traveling to school. Francis Marion was personally not the easiest educational facility at that time to gain an education, but the experience taught me discipline. (It was) the kind of discipline that a 17 year-old or 18 year-old would not have had coming from my background. The hardships taught me that you can do whatever you want to but you have to be disciplined, you have to have structured, and you have to work hard.”

I returned home in September 1970 after four years in the army. My mind was already made up to pursue a college degree. I was going to have to work to finance my own education; therefore living at my father’s house near Johnsonville was part of the solution and Francis Marion College being close to Johnsonville was another major part of the solution to my objective. As a commuter student, breaks between classes was a key time to congregate at the student center and meet other students. Car pooling between the main campus and the Mars Bluff school building for classes sponsored additional bonding time for students from various places. The campus look and feel was soft and friendly and lent itself to commuter education. Dr. Morgan Coker was one of the most outstanding professors of the era. He was retired military and projected commitment to the welfare of the students.