At FMU’s Wildsumaco Research Station, new species – and new experiences for students – are popping up around every bend

If a biologist says a curse word in the forest and no one but one of his students hears it, has he (or she) still cursed?

What if the epithet is uttered, essentially, in the name of science and is a product of the sheer joy of discovery?

Rounding a bend on one of several trails at the 1,000-acre park, Barnhill saw some movement in the mud to his right, a slithering mass of something, half in the dirt and half out of it.

“And then,” says Barnhill, recounting the adventure months later, “he (Knowles) turned into Superman. He handed me the ‘herp bag’ (a special sack used for collecting amphibians, reptiles and other assorted “herpetofauna”), dove into the brush and grabbed that thing (the caecilian) and pulled it out of the ground. … (Knowles) was still using some, uh, interesting language when it came up, but he was clearly very excited.”

And well, he should have been. Knowles had his hands on a rare specimen, a type of legless salamander (the common name is tailless caecilian; it’s in the family Caeciliidae, genus Caecilia) that had never been found on that side of the Andes Mountains and which may, indeed, be an entirely new species.

“There was a lot of high-fiving going on,” says Barnhill. “We didn’t do much the rest of the day except celebrate and show off (the caecilian). That was neat, definitely one of the coolest things I’ve ever done.”

Wildsumaco may be one of the coolest things Francis Marion University has ever done. At the research station, which is situated on land owned and operated by a group of conservationists, and which also includes a private birding sanctuary, professors and students from FMU and two other colleges spend their days (and nights) roaming through a life-size laboratory perched a unique ecological precipice. It’s next to a 12,000-foot high volcano, halfway between a rain forest and some of the world’s highest mountains. The preserve, located in north central Ecuador, is remote and largely unexplored, meaning it is ripe with biological possibilities.

The full extent of those possibilities are just now coming into full focus as FMU completes its third year on site. Wildsumaco, it appears, is teeming with an abundance of heretofore unknown life forms across the genre spectrum.

Dr. Jeffrey Camper, professor of biology and one of the leaders of FMU’s efforts at Wildsumaco, says the richness of the site’s ecology has been a pleasant surprise.

“We certainly hoped that it would be like this,” says Camper, “but I don’t think I can say we expected it would be anything like this. The scope of the undiscovered, unreported species here appears to be remarkable. And we’re really just getting started.”

Research and confirmation work is ongoing – in some cases, at sites around the world – but it appears that already Wildsumaco has yielded a half dozen brand new species. And the potential is there for much more. Camper says one particular group of “rain frogs” (genus Pristimantis) could be home to “10-15 new species.

“I think we’ll find (Wildsumaco) is definitely a biodiversity hotspot,” says Camper. “It’s exciting as a scientist, and I think that’s good for our students to see, in and of itself. You can see what this business is really all about, and it (discoveries) is going to happen to some degree on most of our trips. You’re going to find a lot of things. And, in this place, some of them will be species no one has ever seen before. Who wouldn’t find that interesting?”

Barnhill agrees, although he notes that with the embarrassment of ecological riches that is Wildsumaco, the astonishingly uncommon can quickly become so hum drum, so every day, as to become the butt of the campsite joke.

“While we were down there it got to be where you’d pick something up, throw in the (collection) bag and say, ‘new species!’” says Barnhill. “And then everyone else would say, ‘not another one!’ It became a joke … but it is an amazing place.”

Not the beaten path

Wildsumaco is the brainchild of FMU’s Knowles, and his counterpart at the University of North Carolina – Wilmington, Dr. Brian Arbogast. At Knowles’ behest, they began searching for a possible Ecuadorean research station in 2008, the search being narrowed to Ecuador because both men recognized its latent potential for biological discovery.

The idea bore surprisingly quick fruit when the two universities were able to team up with the Wildsumaco Wildlife Sanctuary, a private preserve owned and preserved by Americans Bonnie and Jim Olson and their Swedish friend Jonas Nilsson. Lifelong birders, Nilsson and the Olsons purchased the land more than a decade ago. Their intent was, and is, to preserve a large swath of land (about 1,000 acres) in a still pristine area, albeit one where the signs of encroaching development are just a ridge or two away.

The trio built the Wildsumaco Lodge, a rustic, birder’s vacation spot, more than a decade ago. Approached by Knowles and Arbogast about some research space, they readily agreed to lease some land to the university partners. FMU agreed to sponsor construction of the three-building field station and the partnership was launched.

The two American universities also work with an Ecuadorian academic partner – Pontificia Universidad Católica del Ecuador (Catholic University) – as well as with officials from Sumaco National Park, a nearby site that encompasses the Sumaco volcano. The station – officially Wildsumaco Biological Station — was completed and opened in 2012. It’s been receiving a steady stream of students and professors from FMU and UNCW ever since — and has been delivering one discovery after another.

There’s no mystery to Wildsumco’s ecological richness. Set on a ridge above a river valley, next to a volcano that is about halfway up the Andes, it is a unique geographical site. The semi-tropical climate provides a lush beginning to the region’s food chain, but the varied elevations and terrains mean a wide variety of life forms can exist and thrive in the area. Some idea of the scale can be found in the fact that the official “bird list” at the Wildsumaco Lodge includes more than 500 species sited on the preserve’s 200-some acres. By comparison, the species count for all of North America is around 1,000.

That would be interesting and, from a researcher’s perspective, rewarding all by itself. But FMU’s Camper says what makes Wildsumaco special is the rugged terrain that chops the jungle up into small compartments, each containing its very own biosphere.

“It’s a jungle, which is usually quite rich,” says Camper, “and then the mountains make it so that its quite easy for a small area, valley, slope, etc., to be isolated and a range limited. You have species that get trapped, if you will, in a small space. And they’re very different from the species just a short distance away on the other side of the ridge.”

On top of all that is the fact that the area just hasn’t been explored. It’s remote and it’s in Ecuador, which is not exactly on the beaten path from a worldwide point of view.

The discovery of the new – or newly scattered – caecilian is a case in point. Researchers have never seen that species, or any version of it, on the east slope of the Andes. But there haven’t been many researchers looking there either.

“It’s just not a place where there’s been a lot of study,” says Knowles, the director of the Wildsumaco Research Station. “We knew that going in, but until you get out in the field and begin working, that really doesn’t hit home. The potential for this place is just astounding.”

Because it’s still early in the history of the Wildsumaco Research Station, and because students play a large role in the work, a good bit of what has gone on so far has a sort of haphazard feel, much like the fortuitous discovery of the caecilian by Barnhill and Knowles during a rainy day walk. But refinement is coming.

FMU and UNCW researchers are already zeroing in on several species. A rare small cat called the Margay (Leopardus wiedii) has become an early focal project (and, indeed, has become the station’s semi-official mascot/logo). The discoveries related to the Margay at Wildsumaco, says Knowles, are highly significant from both a scientific and conservation standpoint.

On the “herp” track, Camper and company are also honing their work. He readily admits that a lot of the discovery work in his area has, so far, involved a fair amount of “accidents.”

“That’s just the nature of the business,” says Camper. “You know certain things, like that night time is a good time. But there is some luck involved, no doubt.”

A lack of luck leads to more thoughtful strategies for the future. For example, Camper says a particularly interesting frog that’s been discovered will require identifying and recording its mating call before verification of its status can be completed. But it is beginning to appear that FMU’s current trip schedule – built around the basic academic year – may be missing the times when the frogs are “in the mood.”

“So if we want to get that we may have to get someone down there at a different time,” says Camper. “We’re working on that.”

The discovery and verification process in biology doesn’t work quickly either, and it’s surprisingly complicated. Camper came across the first caecilian back in 2011, just as the research station was opening. That preserved specimen is at the Catholic University in Ecuador. Two other live specimens were found last year and sent to Catholic (all specimens must remain in Ecuador).

The caecilians currently in custody have been studied and cataloged using morphology – basically a physical description of their form and structure – but more work is required to confirm that this is indeed a new species. That will mean DNA testing.

Camper says that technology has grown by leaps and bounds in the past decade or so, but that doesn’t mean he can just drop off a couple samples at the local ag extension office and get a report back two weeks later. The work can only be done in a few places, and those labs often have large backlogs. DNA from Wildsumaco’s caecilians is in line for comparison studies in both Ecuador and England, the latter being home to one of the world’s leading experts on the subject.

Barnhill says he’s still not sure just what he’ll do with his biology degree. He’s currently pondering a healthcare career, by which he means the health of humans not caecilians. But no matter where he ends up, he’ll never forget the time he spent in Ecuador.

Barnhill’s eyes still light up thinking of the day he found a sample of what may be a previously unknown species.

After capturing the caecilian, Barnhill kept it in a trunk beside his bed at Wildsumaco, waiting for Camper to return so that he could show it to him as a surprise.

“We had kind of a pool among the students as to which of several, um, colorful expressions Camper would use when we showed it to him,” says Barnhill.

And who won the pool?

“Well, I guess you’d say we all did,” says Barnhill, “because when (Camper) saw it, he said every one of them.”

Ah, the marvels of science. 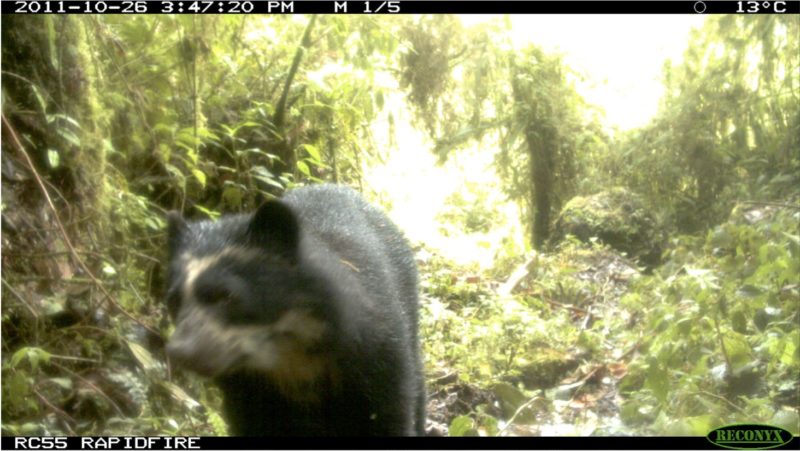 A spectacled bear caught by the trap camera 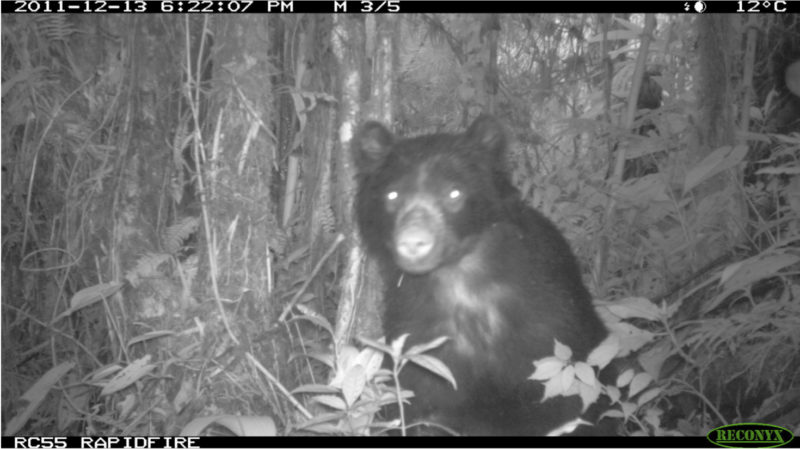 A spectacled bear caught by the trap camera, at night