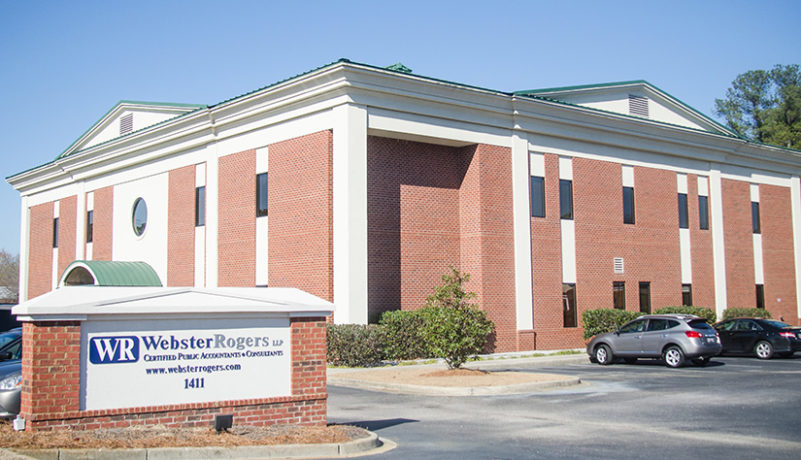 Florence accounting giant WebsterRogers LLP is fortunate to have a bunch of them, including … Francis Marion University.
The firm and the university have enjoyed a long and mutually beneficial relationship that’s seen WebsterRogers’ growth fueled by a steady influx of Francis Marion graduates.

Sixteen FMU grads currently work at WebsterRogers and many more have worked there at various points in their career. It’s a steady flow from a pipeline that stays open because of internships, scholarships (WebsterRogers LLP endowed a scholarship in 2002), and ongoing communication between the firm and the accounting, marketing, and business faculty at FMU’s School of Business.

Frank M. “Buzz” Rogers, a WebsterRogers founding partner and firm namesake, says a dependable local source of new talent has been a boon to the growing firm into the second-largest public accounting firm headquartered in the state of South Carolina in just more than three decades of existence.

“When we have a need for this organization as we grow, we can reach from within our own population that’s been educated here to fill those needs,” Rogers says. “Having local talent that’s been educated locally and can stay here and help the community is very important to us. It helps give the office a very local flavor.”

A well-respected, growing accounting firm, and a nearby university with a highly regarded professional school for accountants and other business majors would likely have produced some relationship no matter what other factors were in play. But the WebsterRogers-FMU connection might not have started as soon as it did, and certainly would not enjoy the same relational depth, were it not for one very special ingredient: Carroll Webster.

Webster was one of FMU’s first accounting professors. He taught accounting and taxation at the school from 1973-82, then left to join Rogers and several others in forming a new Florence accounting firm, Webster, Rogers, West, Berry & Grady. Webster officially retired from the firm that eventually became WebsterRogers LLP in 2011. He remains a consulting partner.

Webster says his immediate past connection to FMU gave him an obvious “in” with faculty and students at the school, particularly in the accounting department. But just as importantly, it gave him the confidence to make the earlier hires which helped established the lasting trend.

“Having been a professor out there was a big advantage for me,” Webster says. “I always had a leg up at Francis Marion and knew what I was getting. If someone came out of there with a 3.5 grade point average or higher, I knew we were getting someone who was well versed in accounting.”

Webster and the new firm began hiring from FMU immediately. But the pace really picked up as the firm developed and the university grew. During the mid-1990s, WebsterRogers grew at a rapid pace. New satellite offices were established in Myrtle Beach, Sumter, Hilton Head, Georgetown, Charleston, Columbia, and Pawley’s Island; and the firm’s headquarters operation grew, too. That growth required a continuous infusion of talent. WebsterRogers’ partners knew just where to look. FMU grads popped up everywhere in the firm and quickly dominated the corporate landscape. At one point during the firm’s rapid expansion in the 1990s, every member of the tax department – a critical arm of the practice — was an FMU grad.

The connection has worked for WebsterRogers on a number of levels. Management at the firm believes it has found a “secret source” of top drawer business and accounting talent at FMU that it can tap long before other businesses even know about it. And, because those employees have some connection to the Florence area – many are from the area, all have, at the very least, spent their college years at FMU – they’re more likely to stay. But a pathway to advancement at a significant and well-resourced local business — one like WebsterRogers — can keep the kids at home.

That has been the case with William Hardaway III, a 2011 FMU accounting graduate who joined WebsterRogers immediately after his tassels were turned at commencement. For Hardaway, the decision was pretty easy. For a top accounting student from FMU, a post at WebsterRogers was a plum.

“Being from Florence, I was very aware of the firm,” Hardaway says. “WebsterRogers is the place you want to go if you’re in Florence.”

The relationship with WebsterRogers provides the university’s School of Business with some unique tools. The ongoing internships are nice, but they’re really just the tip of the iceberg as far as the university is concerned. Regular access for top graduates to top jobs at a leading firm is an invaluable asset.

Dr. Charles Carpenter, the Francis Marion First Union Bank chair in accounting and interim assistant to the dean of the school of business, says that connection means better results for graduates, but better results for the university as well.

“(WebsterRogers) has provided a professional experience for our graduates, which the graduates have shared with students in the program,” Carpenter says. “That serves as an incentive for more students to major in accounting and business.”

“Based upon the performance of the graduates from our program with the firm, I believe they (WebsterRogers) have found intelligent, hardworking persons with a strong work ethic,” Carpenter says.

“Over the years,” says Buzz Rogers, “they’ve been some of our best employees.”