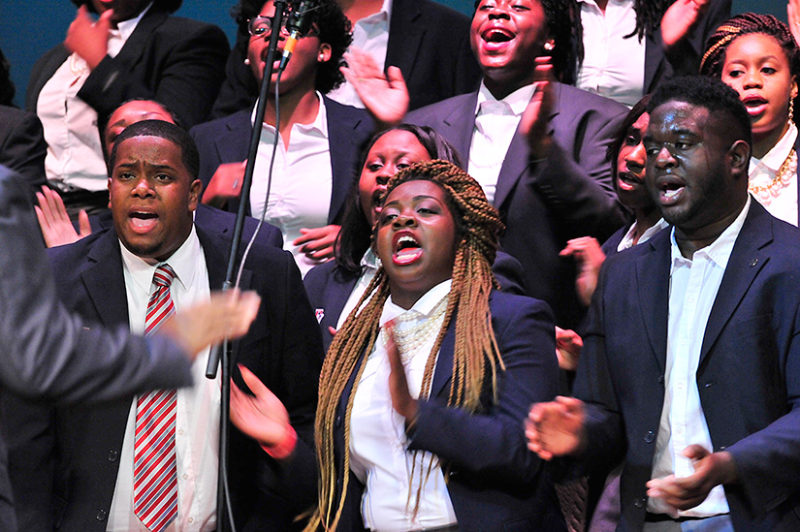 For 25 years, the Young, Gifted & Blessed choir has carried on a spiritual tradition at FMU

If you came here to be entertained, you came to the wrong place.

This isn’t the typical invitation to a concert at Francis Marion University – or anywhere for that matter –but that’s what a packed house heard at the fall performance of FMU’s Young Gifted and Blessed (or YGB) gospel choir.

While most entertainers hope to achieve some level of entertainment with their audiences, YGB performers shutter at being described as mere “entertainers.” They are hoping to do a little better than that. They want their patrons to experience the divine.

“I want them to say we gave them Jesus,” says Jeffery Lampkin, the group’s director. Again, probably not typical of performances at FMU, but then again describing YGB as “typical” is always a mistake.

And, as far as that goes, not being entertained has never been so entertaining as it is at YGB’s rollicking, fully amplified celebrations of faith and music.

The group has been a part of university life at FMU for 25 years. A generation of YGBers have made a name for themselves — in the Florence community, and in more recent years, across South Carolina – while spreading a message of spirituality and maintaining the powerful tradition of the African American gospel choir.

All of that, and more, was on display at last fall’s show. People began crowding into Chapman Auditorium’s lobby and onto the concrete steps outside nearly two hours in advance. There, one could hear the more than 50 voices in a pre-concert warm up, accompanied by clapping hands and stomping feet. The vibrations escaped through the venue’s walls and into the autumn air.

Inside, the thunder rose to an impressive volume. Director Lampkin led the choir in sound check at a last minute rehearsal that was far more than a simple walk through. Lampkin challenged the group to perform one of their more difficult selections, “Joshua Fought the Battle of Jericho” by Dexter Walker and Zion Movement, a cappella.

“It’s such a complicated song, it has so many movements in it,” Lampkin said that afternoon. “In gospel we don’t have movements. We just have the chorus, the verse the bridge. That’s kind of how we flow, an A, a B, and a C. But in this song you’ve got A,B,C,D, E, movements to the song and they had never done it without music.”

Such an exercise, Lampkin explained, stretches YGB’s ability and keeps them focused on the upcoming performance. That combination of psychology and technique is just one of the reasons Lampkin was brought in as director of the group four years ago, even though he isn’t a member of staff or the student body at Francis Marion.

Lampkin begin his work with YGB as a consultant, tasked with improving the troupe’s sound. But an unexpected vacancy at director in the middle of a season – paired with the student’s lingering desire to take the group to the touring level – pushed Lampkin into the director’s chair (although to be honest, the job, at least as he performs it, doesn’t seem to entail much sitting).

Lampkin’s mission to improve the sound has gone hand in hand with a push to take that sound more places. YGB has adopted a more aggressive touring circuit, regularly traveling around the state to perform. It was, for instance, the only college choir in the state to sing at Columbia’s Family Fest & Memorial Tribute, a gospel festival attended by more than 40,000 people.

“This choir has gone to another dimension and another level,” says Lampkin.

YGB is an organization with many different levels; be it the varying roles its 78 members play – most sing in the choir, but others serve as musical accompaniment, ushers and other support staff – to the history behind its name.

The initials “YGB” didn’t always mean “Young Gifted and Blessed.” When the group was started in the late 1980s, with the late Rebecca Lunn, a former FMU staffer, as its first university advisor, it was known as the “Young, Gifted and Black” choir. Not surprisingly, it was made up entirely of African Americans.

“Young, Gifted and Black” comes from a 1970 song written by Nina Simone and Weldon Irvine, To Be Young, Gifted and Black. Upon its release, it quickly climbed the R&B charts and soon turned into something of a civil rights anthem. Its popularity increased still more when the “Queen of Soul,” Aretha Franklin, released her 1972 album under the same name, which included a cover of the Simone/Irvine tune. Since then, “Young, Gifted and Black” has been covered by a variety of artists and interpreted in numerous genres. Because of that, the phrase was folded into the lexicon surrounding African American culture.

It served the FMU group well during its formative years. But the Rev. Donald L. Jackson, the group’s current staff advisor, says a decade or so in, students thought their spiritual message needed to extend to a wider audience.

So, Young, Gifted & Blessed was formed. The group, which operates as a university-sponsored organization, now has more than a decade of tradition behind the new name. And, some progress has been with regards to diversity. Students of more than one race have participated from time to time. But, the vast majority of YGB’s members then and now are African American. The group at the November performance, for instance, was entirely African American.

Whatever its name, YGB’s focus is far more spiritual political, the draw religious not secular.

Kristian Nelson, YGB’s president and a senior at Francis Marion, was drawn to the choir as a freshman because she sought the spiritual fulfillment she knew growing up in the Christian faith of her hometown of Charleston.

“I grew up at church and always went to church every Sunday,” Nelson says. “But when I came to college, I found there was nothing for me to do, so I was sort of missing the Christianity aspect.”

Through her fellow students, Nelson heard of YGB and joined.

“I think that speaks to the authenticity of our ministry,” director Lampkin said of the crowd. “I think it speaks to the impact that we have on so many lives over and over. We try to make sure that everything we do is in order, that we operate in order and that we do everything the way God would want us to do.”

Hence, the fall concert this year was billed as a “Sunday Morning Experience,” and the performance featured three preachers – including Jackson, who, by day, works in the university’s accounting department – and a small local gospel choir. They all served, after a fashion, as YGB’s opening act. And it was clear that YGB was the star of the show.

Even before the headliners arrived on stage, audience members were already on their feet, shouting praise, closing their eyes with hands raised, and some even moved to tears. The excitement grew with each high-powered note YGB belted out, audience members soaking up some of the faith conveyed by each song.

Members of YGB were definitely into it. Sweat rolled down more than one brow. The audience swooned. Something definitely beyond “entertainment” was going on.

“We want people to leave with some kind of change, some kind of experience,” says Nelson. “If a little tear comes to your eye we know we touched you some kind of way, and that’s our goal really. Just to move you a little bit so you can get closer to God, or so you can see why we’re doing what we’re doing.” 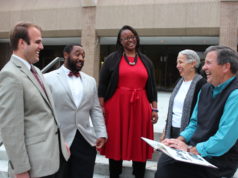 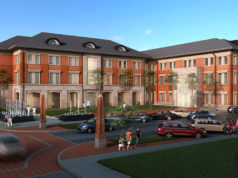 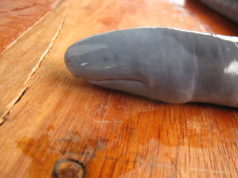